A further expansion in Canada Retail Sales may heighten the appeal of the loonie and threaten the range-bound price action in USD/CAD as boosts the outlook for growth and inflation.

Despite the technical recession in Canada, data prints pointing to a marked recovery in the third-quarter may encourage the Bank of Canada (BoC) to endorse a wait-and-see approach throughout 2015, and the central bank may show a greater willingness to conclude its easing cycle in the year ahead as Governor Stephen Poloz sees the economy on a firmer footing.

Signs of a more meaningful recovery accompanied by the ongoing improvement in the labor market may generate a strong boost for private consumption, and a positive development may spur a bullish reaction in the Canadian dollar as it curbs expectations for a further reduction in the benchmark interest rate.

In contrast, a soft retail sales report may fuel fears for a more slowdown in Canada, and a dismal print may prompt the central bank to further insulate the real economy in an effort to pull the region out of the technical recession. 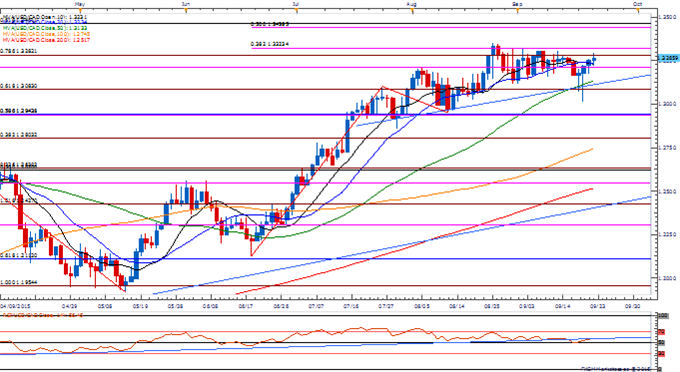 Canada Retail Sales exceeded market expectations as household spending increased 0.6% in June following a revised 0.9% expansion the month prior. A deeper look at the report showed increased demand for electronics/appliances accompanied by higher gasoline receipts, but discretionary spending on clothing slipped 0.4% in June. Despite the better-than-expected prints, the Bank of Canada (BoC) may see scope to further support the region as Governor Stephen Poloz continues to monitor the impact of lower oil prices on the real economy. The initial market reaction was short-lived, with USD/CAD snapping back above the 1.3100 handle during the North American trade to end the day at 1.3179.