- Core Rate of Inflation to Slow to 2.1%- Slowest Rate of Expansion Since February.

Even though Canada’s Consumer Price Index (CPI) is expected to expand an annualized 1.3% in August, a marked slowdown in the core rate of inflation may dampen the appeal of the loonie and spur a near-term rally in USD/CAD as it boosts expectations for additional monetary support.

Despite the wait-and-see approach endorsed by the Bank of Canada (BoC), easing price growth may encourage Governor Stephen Poloz to further insulate the real economy, and the central bank may keep the door open to implement additional rate cuts as the region continues to adjust to the decline in oil prices.

Canadian firms may offer discounted prices especially as the economy enters a technical recession, and a dismal inflation report may renew the bearish sentiment surrounding the loonie as the BoC continues to gauge the ongoing slack in the real economy.

Nevertheless, the pickup in private consumption along with the ongoing improvement in the labor market may help to encourage sticky price growth, and a better-than-expected CPI print may spur a further decline in USD/CAD as the Federal Reserve further delays its normalization cycle. 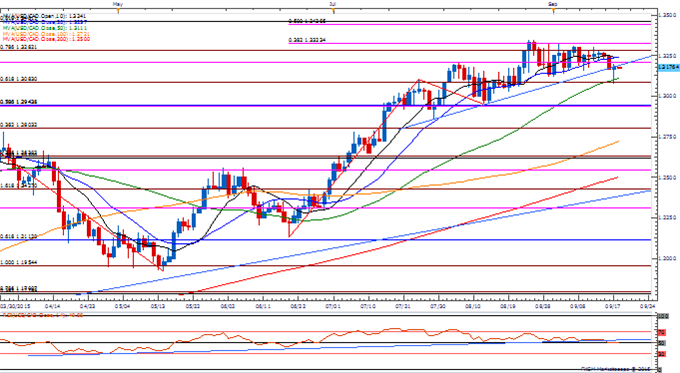 Price & Time: NZD/USD - What to Watch For After The Fed

Canada’s Consumer Price Index (CPI) rose for the third consecutive month in July, with the headline reading climbing an annualized 1.3% to mark the fastest pace of growth for 2015. At the same time, the core rate of inflation increased 2.4% from 2.3% the month prior to match market expectations. Despite sticky price growth, the Bank of Canada (BoC) may keep the door open to further reduce the benchmark interest rate as the central bank continues to monitor the economic adjustment to lower oil prices. The initial market reaction was short-lived, with USD/CAD climbing above the 1.3150 during the North American trade to end the day at 1.3179.