A 5.0K contraction in U.K. Jobless Claims along with signs of faster wage growth may generate a short-term rebound in GBP/USD as it puts increased pressure on the Bank of England (BoE) to normalize monetary policy sooner rather than later.

Even though the U.K. continues to face subdued inflation, a pickup in household earnings may reinforce the BoE’s expectations for stronger price growth, and a series of positive developments may heighten the appeal of the sterling especially as a growing number of central bank officials prepare households & businesses for higher borrowing-costs.

The rebound in retail sales paired with the expansion in service-based activity may prompt a further improvement in the U.K. labor market, and a batch of positive data prints may spark a bullish reaction in the British Pound as it boosts interest rate expectations.

However, slower production accompanied by the decline in building activity may drag on hiring, and a dismal development may continue to encourage an 8-1 split within the Monetary Policy Committee (MPC) as the central bank continues to gauge the spare capacity within the real economy. 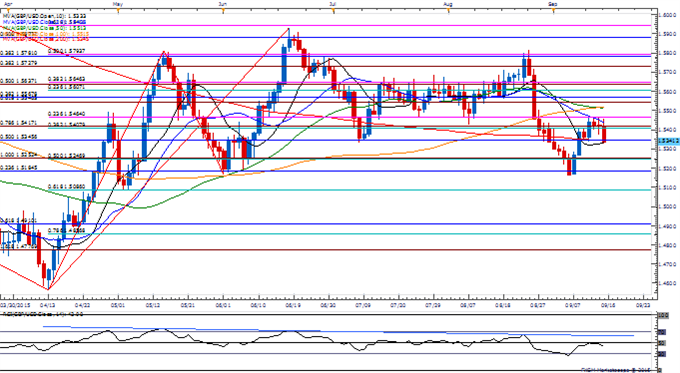 U.K. Jobless Claims unexpectedly contracted 4.9K in July after increasing a revised 0.2K the month prior, declining to a 3-month low. Besides, the ILO Unemployment Rate unexpectedly remained flat at an annualized 5.6% during the three-months through July, while average weekly earnings growth fell to 2.4% from 3.2% in the three months through June due to lower bonuses. Despite the worse-than-expected prints, it seems that the Bank of England (BoE) keeps confident over the economic recovery and it will unlikely change the previous hawkish tone on monetary policy. The initial bearish reaction in sterling was short-lived, with GBP/USD surging above the 1.5650 region during the North American session. The pair came back later and closed the day at 1.5608.