Disappointing U. of Michigan Survey to Further Fuel EUR/USD Recovery

- U. of Michigan Survey to Narrow for Third-Consecutive Month .

- Reading of 91.1 Would Mark the Lowest Reading Since May.

Another downtick in the U. of Michigan Confidence survey may dampen the appeal of the greenback and encourage a larger rebound in EUR/USD as it raises the Fed’s scope to further delay the normalization cycle.

There’s growing speculation that the Federal Open Market Committee (FOMC) will retain the zero-interest rate policy (ZIRP) at the September 17 interest rate decision amid the mixed batch of data coming out of the U.S. economy, but the central bank may stay on course to introduce higher borrowing-costs in 2015 as Chair Janet Yellen anticipates a stronger recovery ahead.

Signs of slowing job growth paired with stagnant wages may further erode household sentiment, and a marked decline in the U. of Michigan survey may push the Fed to adopt a more dovish tone at next week’s policy meeting amid the weakening outlook for global growth.

On the other hand, the expansion in private lending accompanied by the pickup in economic activity may generate a better-than-expected confidence survey, and a positive development may keep the Fed on course to raise the benchmark interest rate later this year as the central bank retains an upbeat outlook for the economy.

Bearish USD Trade: U. of Michigan Survey Slips to 91.1 or Lower 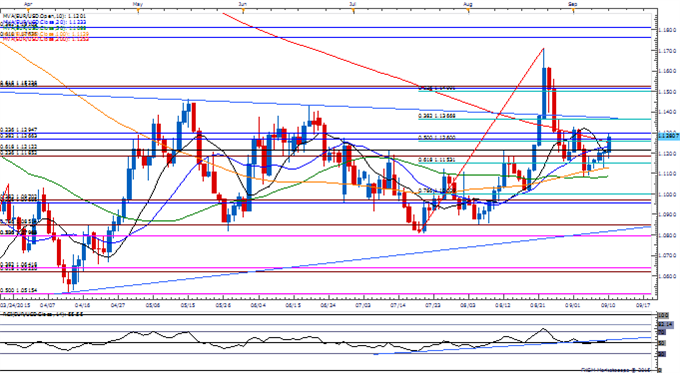 Impact that the U. of Michigan survey has had on EUR/USD during the last release

August 2015 U. of Michigan Confidence

The U. of Michigan Confidence survey unexpectedly weakened for a the second consecutive month in August, with the figure narrowing to 92.9 from 93.1 the month prior. Nevertheless, the 12-month gauge for inflation expectations held steady at an annualized 2.8%, but the renewed weakness in energy prices may drag on the outlook for price growth amid the disinflation environment across the major industrialized economies. The initial market reaction to the worse-than-expected print was short-lived as the greenback retained its footing following the release, with EUR/USD closing the day at 1.1107.