According to a Bloomberg News survey, all of the 27 economists polled forecast the Reserve Bank of Australia (RBA) to keep the benchmark interest rate on hold at 2.00%, but the fresh language coming out of the central bank may drag on AUD/USD should Governor Glenn Stevens adopt a more dovish outlook for monetary policy.

The RBA may have little choice but to scrap its wait-and-see approach amid the growing concerns surrounding China – Australia’s largest trading partner – and the aussie remains at risk of facing additional headwinds over the near to medium-term as the ongoing easing cycle in the Asia/Pacific region puts increased pressure on Governor Stevens to offer lower borrowing-costs.

Sticky inflation along with the pickup in job growth may encourage the RBA to endorse a neutral policy stance throughout 2015, and a string of upbeat comments may heighten the appeal of the Australian dollar as market participants scale back bets for lower borrowing-costs.

However, the RBA may show a greater willingness to further embark on its easing cycle amid waning confidence paired with the ongoing contraction in business investments, and a slew of dovish rhetoric may spur fresh yearly lows in AUD/USD amid the deviation in the policy outlook.

USDJPY-Just a Dip or Important Reversal? 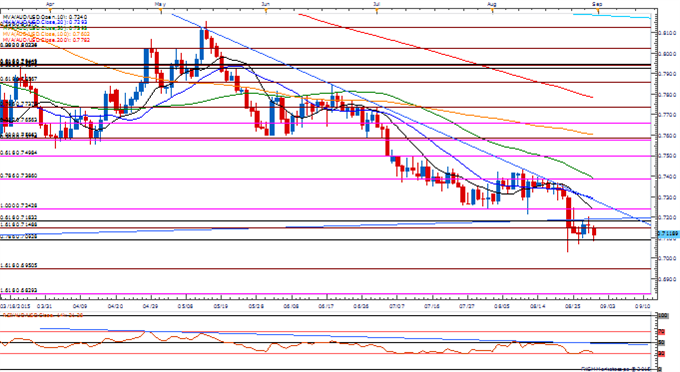 As expected, the Reserve Bank of Australia (RBA) kept the benchmark unchanged at the record-low of 2.00%, with Governor Glenn Stevens largely endorsing a wait-and-see approach even as the region continues to face below-trend growth. It seems as though the RBA will largely retain its current policy stance as the central bank sees the previous rate cuts working through the real economy, but Governor Stevens may come under increased pressure to further insulate the region as the slowdown in China – Australia’s largest trading partner – dampens the outlook for growth and inflation. Nevertheless, the Australian dollar strengthened following the rate decision, with AUD/USD snapping back above the 0.7300 handle during the Asia-Pacific trade to end the session at 0.7374.