Slowing German CPI to Hit EUR/USD Ahead of ECB Meeting?

- Will Risk for Slower Inflation Encourage the ECB to Expand/Extend QE Program?

Signs of slowing inflation in Europe’s largest economy may drag on EUR/USD and push the European Central Bank (ECB) to broaden its quantitative easing (QE) program as it undermines the Governing Council’s scope to achieve its one and only mandate for price stability.

The weakening outlook for global growth accompanied by the renewed decline in energy prices may encourage ECB President Mario Draghi to adopt a more dovish outlook at the September 3rd policy meeting, and the single currency remains at risk of facing additional headwinds over the near to medium-term should the central bank show a greater willingness to further embark on its easing cycle.

Waning confidence paired with the ongoing weakness in household consumption may encourage U.S. firms to offer discounted prices, and a marked downtick in the CPI may generate a bearish reaction in the greenback as it drags on interest rate expectations.

Nevertheless, the expansion in service-based activity along with the pickup in private-sector credit may encourage a sticky inflation print, and a positive development may boost the appeal of the reserve currency as the Fed remains on courses to normalize monetary policy in 2015. 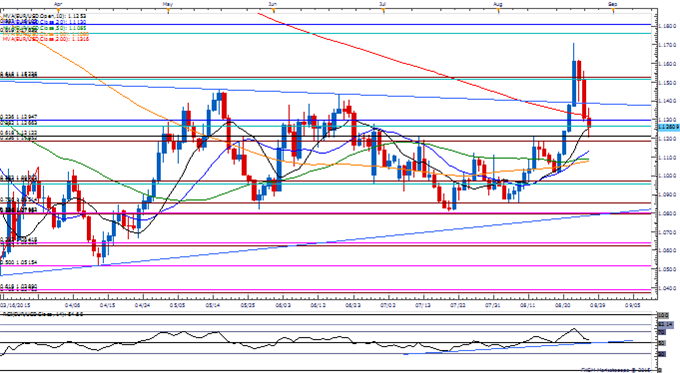 Germany’s Consumer Price Index (CPI) fell short of market expectations as the headline print slowed to an annualized 0.2% from 0.3% the month prior. As a result, the European Central Bank (ECB) may continue endorse its pledge to ‘fully implement’ its quantitative easing (QE) program until September 2016, and the Governing Council may keep the door open to further embark on its easing cycle amid the disinflationary environment across the major industrialized economies. The Euro edged lower following the worse-than-expected print, with EUR/USD losing ground throughout the North American trade to end the day at 1.0929.