- Personal Consumption to Pick Up for Second Consecutive Quarter.

An upward revision in the 2Q U.S. Gross Domestic Product (GDP) report may boost the appeal of the greenback and spark a larger pullback in EUR/USD as it fuels speculation for a September Fed rate hike.

The Fed may stay on course to normalize monetary policy in 2015 as the central bank still anticipates a stronger recovery to materialize over the coming months, and data prints encouraging an improved outlook for growth & inflation may spur a greater dissent within the committee as the economy gets on a more sustainable path.

The expansion in service-based activity along with the pickup in household spending may generate a stronger-than-expected GDP print, and a positive development may boost interest rate expectations as Fed Chair Janet Yellen remains upbeat on the economy.

However, easing job growth paired with the slowdown in building activity may drag on growth rate, and signs of a slower recovery may spur a further delay of the Fed’s normalization cycle as the central bank struggles to achieve the 2% target for inflation. 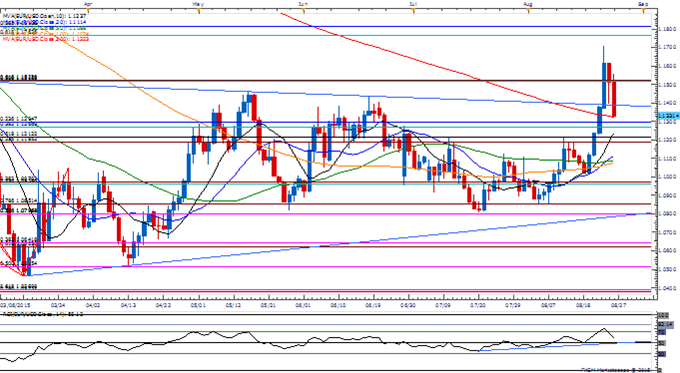 AUD/USD Downside Targets in Focus Ahead of RBA September Meeting

The preliminary 1Q Gross Domestic Product (GDP) report a downward revision in the growth rate to reflect an annualized 0.7% contraction in the growth rate amid an initial forecast for a 0.2% expansion. At the same time, Personal Consumption also failed to meet market forecast as the figure unexpectedly slowed to 1.8% from an advance reading of 1.9%. Despite the dismal GDP reading, the Federal Reserve may stay on course to remove the zero-interest rate policy (ZIRP) as the central bank sees the economic slowdown largely driven by transitory/seasonal factors. The initial market reaction was short-lived, with EUR/USD largely consolidating between 1.0950 and 1.1000, with the pair ending the North American trade at 1.0982.