- Will a Rebound in Private-Sector Consumption Encourage a Greater Dissent Within the BoE?

A 0.4% rebound in U.K. Retail Sales may heighten the appeal of the British Pound and fuel the near-term breakout in GBP/USD as it puts increased pressure on the Bank of England (BoE) to raise the benchmark interest rate off of the record-low.

Positive data prints coming out of the U.K. economy may highlight a tightening race between the BoE/Fed to normalize monetary policy, and GBP/USD may continue to retrace the decline from July 2014 should the fundamental developments spur a growing dissent within the Monetary Policy Committee (MPC).

Stronger wage growth paired with the expansion in private-sector credit may boost household spending in the U.K., and a strong rebound in retail sales may generate fresh monthly highs in GBP/USD as market participants ramp up expectations for a BoE rate hike.

However, higher prices along with narrowing confidence may drag on consumer spending, and a dismal print may drag on the British Pound and spur a further delay of the BoE’s normalization cycle as the majority continues to look for a stronger recovery. 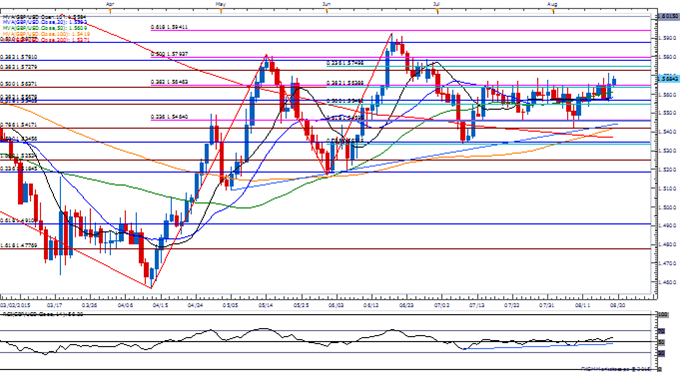 U.K. Retail Sales unexpected contracted 0.2% in June after expanding 0.2% the month prior. A deeper look at the report showed demand for Household Goods slipped 0.9% from the previous month to lead the decline, while discretionary spending on Clothing & Footwear increased 0.8% after contracting 1.5% in May. Despite the recent weakness in household consumption, the Bank of England (BoE) may stay on course to normalize monetary policy as Governor Mark Carney anticipates a stronger recovery to emerge in the second-half of 2015. The sterling struggled to hold its ground following the worse-than-expected print, with GBP/USD slipping below the 1.5625 region to end the day at 1.5510.