- Will Faster Growth Spark a ‘Taper Tantrum’ as GDP Picks Up for Three-Straight Quarters?

The Euro-Zone’s 2Q Gross Domestic Product (GDP) report may boost the appeal of the single currency and spur fresh monthly highs in EUR/USD as the growth rate is expected to increase 1.3% following the 1.0% expansion during the first three-months of 2015.

Despite the European Central Bank’s (ECB) pledge to ‘fully implement’ its quantitative easing (QE) program, data prints pointing to a stronger recoverymay encourage the Governing Council to adopt an improved outlook for the region, and the board remains at risk of facing a ‘taper tantrum’ over the medium-term as central bank President Mario Draghi remains confident in achieving the one and only mandate for stability.

Improved confidence along with the pickup in private-sector lending may generate a strong GDP figure, and a positive development may spur a bullish reaction in the euro as it dampens the ECB’s scope to further embark on its easing cycle.

However, slowing outputs paired with the ongoing weakness in private-sector spending may drag on the growth rate, and a dismal print may undermine the near-term advance in EUR/USD as it raises the risk of seeing the ECB implement more non-standard measures.

GBPAUD Putting in a High or Time to Buy? 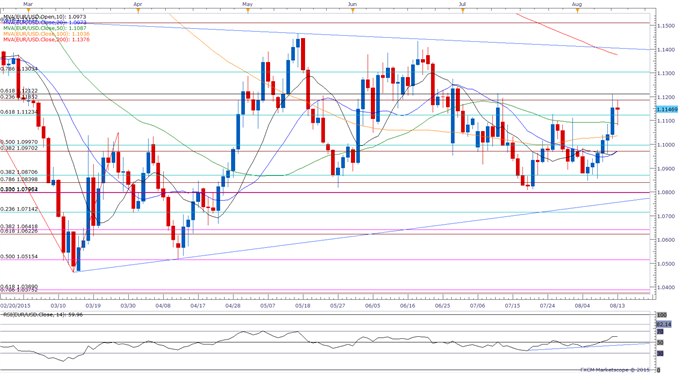 The euro-area grew at the fastest pace in 2-years as the growth rate increased an annualized 1.0% following the 0.9% expansion during the last three-months of 2014. Despite the dovish tone held by the European Central Bank (ECB), positive developments coming out of the real economy may encourage a growing dissent within the Governing Council, and the central bank may come under pressure to scale-back its asset-purchase program as the region appears to be getting on a firmer footing. The Euro rallied following the pickup in GDP, with EUR/USD climbing above the 1.1300 handle to end the North American trade at 1.1353.