- Household Spending Has Failed to Grow Five Out of the Past Seven-Months.

A 0.6% rebound in U.S. Retail Sales may boost demand for the greenback and spur a near-term pullback in EUR/USD as a pickup in private-sector consumption fuels expectations for a Fed rate hike at the September 17 interest rate decision.

Indeed, data pointing to a stronger recovery may keep the Fed on course to remove the zero-interest rate policy (ZIRP) in 2015 especially as the central bank sees the U.S. economy approaching full-employment, but another unexpected slowdown in household spending may further delay the normalization cycle as Chair Janet Yellen and Co. struggle to achieve the 2% target for inflation.

The expansion in private-sector credit along with the ongoing improvement in the labor market may generate a marked rebound in retail sales, and the Fed may show a greater willingness to lift the benchmark interest rate off the record-low as the economy gets on a more sustainable path.

However, waning confidence paired with subdued wage growth may drag on consumption, and another dismal sales report may undermine the Fed’s expectations for a stronger recovery, which could ultimately lead to a further delay of the normalization cycle. 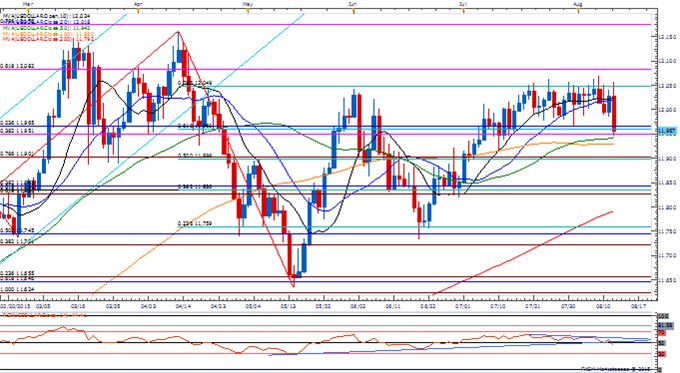 EUR/USD Breaks Out- Targets to Watch Ahead of Greek Vote, 2Q GDP

U.S. Retail Sales unexpectedly declined 0.3% in June, while the previous month’s print was also revised lower to reflect a 1.0% increase from an initial print of 1.2%. The decline was largely driven by a 1.6% in demand for future, while discretionary spending on clothing dipped 1.5% during the same period. Even though the Federal Reserve remains on course to raise the benchmark interest rate in 2015, the ongoing weakness in private-sector consumption may further delay the normalization cycle as it remains one of the leading drivers of growth and inflation. Nevertheless, the initial market reaction was short-lived, with EUR/USD quickly snapping back from 1.1085, with the pair consolidating throughout the North American trade to end the day at 1.1006.