Another 1.0K expansion in U.K. Jobless Claims may produce headwinds for the British Pound and spur a near-term decline in GBP/USD as it raises the risk of seeing the Bank of England (BoE) further delay its normalization cycle.

Despite the 8-1 split at the August 6 interest rate decision, a slowdown in job growth may encourage the BoE to carry the record-low benchmark interest rate into 2016, and the sterling may struggle to hold its ground over the remainder of the year should the key developments coming out of the U.K. economy drag on interest rate expectations.

Lower consumption paired with slowdown in building activity may encourage U.K. firms to scale back on hiring, and a dismal Jobless Claims report may dampen the appeal of the British Pound as it undermines the BoE’s expectations for a faster recovery in the second-half of 2015.

However, improved confidence along with the pickup in business outputs may boost job growth, and a positive development may spur greater demand for the sterling as market participants ramp up bets for higher borrowing-costs in the U.K. 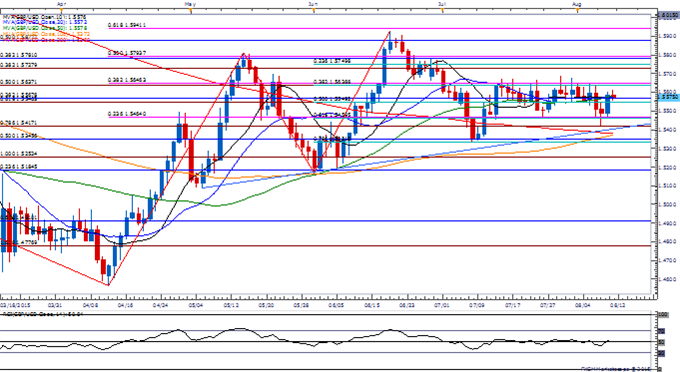 U.K. Jobless Claims unexpectedly increased 7.0K in May after contracting a revised 1.1K the month prior to mark the first rise since October 2012. At the same time, the ILO Unemployment Rate unexpectedly rose to an annualized 5.6% from 5.5% during the three-months through May as employment slipped 67K from the previous month. Despite the slowdown in job growth, expectations for stronger recovery should keep the Bank of England (BoE) on course to lift the benchmark interest rate off of the record-low as Governor Mark Carney continues to prepare U.K. households and business for higher borrowing-costs. Nevertheless, the market reaction was short-lived as GBP/USD managed to hold above the 1.5600 handle, but the pair continued to consolidate during the North American trade to end the day at 1.5632.