Another 225K expansion in U.S. Non-Farm Payrolls (NFP) may spur greater demand for the greenback and spark a near-term sell-off in EUR/USD should the fresh batch of data heighten speculation for a Fed rate hike at the September 17 meeting.

Despite the unanimous vote to retain the zero-interest rate policy (ZIRP) at the July 29 meeting, signs of a stronger recovery may generate a greater dissent within the Federal Open Market Committee (FOMC), and we may see a growing number of central bank officials talk up bets for a September liftoff should the employment report boost the outlook for growth and inflation.

The ongoing expansion in service-based activity paired with pickup in the housing market may encourage a strong NFP print, and a better-than-expected release may spur a near-term rally in the greenback as it boosts interest rate expectations.

However, waning business sentiment along with the ongoing weakness in private-sector spending may drag on job growth, and a dismal employment report may encourage the Fed to further delay its normalization cycle especially as Chair Janet Yellen looks for a further improvement in labor dynamics. 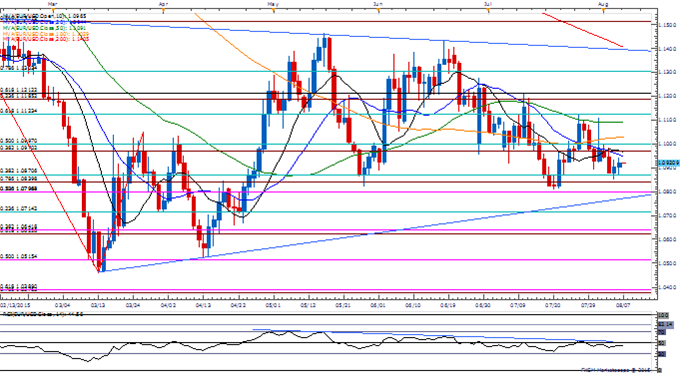 U.S. Non-Farm Payrolls(NFP) increased 223K in June following a revised 254K expansion the month prior, while the unemployment rate narrowed to an annualized 5.3% from 5.5% to mark the lowest reading since April 2008. However, the downtick in the jobless rate was accompanied by a decline in labor force participation as the rate slipped to 62.6% from 62.9% in June, while wage growth missed market estimates and unexpectedly slowed to 2.0% from 2.3% during the same period. Despite the ongoing improvement in the labor market, the ongoing slack in the real economy may prompt the Federal Reserve to further delay its normalization cycle as the central bank remains in no rush to remove its highly accommodative policy stance. The bearish reaction in the dollar failed to gather pace, with EUR/USD struggling to hold above the 1.1100 handle throughout the North American session to end the day at 1.1082.