- Will We See a Greater Dissent Within the Voting-Committee?

The fresh rhetoric coming out of the Federal Open Market Committee (FOMC) may heighten the bullish sentiment surrounding the greenback and spur a near-term decline in EUR/USD should the central bank show a greater willingness to remove the zero-interest rate policy (ZIRP) later this year.

Why Is This Event Important:New language endorsing a September liftoff should boost the appeal of the dollar as market participants price higher borrowing-costs, but another unanimous vote may drag on interest rate expectations as Chair Janet Yellen remains in no rush to normalize monetary policy.

Sticky price growth along with expectations for faster growth may keep the Fed on course to raise the benchmark interest rate in 2015, and the dollar may resume the long-term bullish trend going into August should the central bank sound more hawkish this time around.

Nevertheless, weak wage growth paired with the ongoing slack in private-sector consumption may undermine the Fed’s forecast for a stronger recovery, and the greenback may face near-term headwinds should the central bank see scope to further delay the normalization cycle. 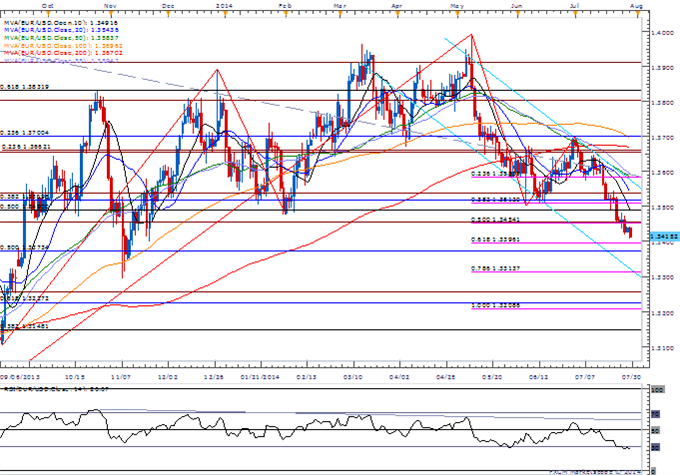 Price & Time: Calm Before the Storm?

NZDUSD Breakout or Fake-Out? Key Levels to Know Ahead of FOMC, US GDP

As expected, the Federal Open Market Committee (FOMC) retained its current policy in June, but the central bank sounded more dovish this time around as Fed Chair Janet Yellen pledged to await for a further improvement in the labor market before removing the zero-interest rate policy (ZIRP). Despite speculation for a September liftoff, the ongoing mixed batch of data coming out of the U.S. economy may spur a further delay in the Fed’s normalization cycle as the outlook for growth and inflation remains subdued. The more cautious tone dragged on the greenback, with EUR/USD climbing above the 1.1300 handle to close the day at 1.1334.