- Will the Bank of England (BoE) Show a Greater Willingness to Normalize Policy?

The U.K.’s Gross Domestic Product (GDP) report is expected to show the economy expanding 0.7% in the second-quarter of 2015, and a faster rate of growth may boost the appeal of the British Pound and generate a near-term advance in GBP/USD as it puts increased pressure on the Bank of England (BoE) to normalize monetary policy sooner rather than later.

Signs of a stronger recovery may spur a greater dissent within the Monetary Policy Committee (MPC) as a growing number of central bank officials adopt a more hawkish outlook for inflation, and we may see a tightening race between the BoE & Fed to normalize monetary policy as Governor Mark Carney continues to prepare U.K. households and businesses for higher borrowing-costs.

Improved confidence along with the pickup in business outputs may encourage a strong GDP print, and a marked expansion in economic activity may boost interest rate expectations as the BoE remains on course to lift the benchmark interest rate off of the record-low.

Nevertheless, easing job growth paired with the slowdown in private sector-consumption may drag on the growth rate, and a dismal development may lead to further delay in the BoE’s normalization cycle as the central bank remains unanimous in preserving the current policy stance. 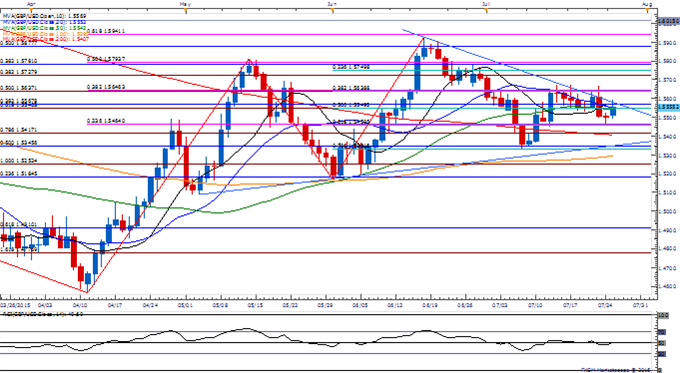 Price & Time: What Is GBP Volume Telling Us?

The 1Q U.K. Gross Domestic Product (GDP) fell short of market expectations as the preliminary reading showed an annualized 2.4% rise in the growth rate following the 3.0% expansion during the last three-months of 2014. The slower rate of growth may encourage the Bank of England (BoE) to preserve its wait-and-see approach throughout 2015, but Governor Mark Carney may continue to prepare U.K households and businesses for higher borrowing-costs as the central bank head anticipates a stronger recovery in the second-half of the year. The market reaction to the dismal GDP print was short-lived, with GBP/USD snapping back above the 1.5200 handle, and the pair tracked higher throughout the North American trade to end the day at 1.5337.