- Bank of Canada (BoC) Expected to Cut Benchmark Interest Rate to Record-Low of 0.50%.

According to a Bloomberg News survey, 15 of the 29 economists polled forecast the Bank of Canada (BoC) to reduce the benchmark interest rate by 25bp to a record-low of 0.50%, and a dovish statement accompanying the rate decision may spur fresh 2015 highs in USD/CAD especially as the Fed remains on course to normalize monetary policy later this year.

Fears of a slowing recovery in Canada may encourage BoC Governor Stephen Poloz to implement more ‘insurance’ measures to curb the ongoing slack in the real economy, and the Canadian dollar may face additional headwinds over the near to medium-term should the central bank head highlight a more dovish outlook for monetary policy.

The BoC may further embark on its easing cycle as waning demand from home and abroad dampens the outlook for growth and inflation, and the central bank may keep the door open to implement additional monetary support in an effort to mitigate the downside risks surrounding the real economy.

However, sticky price growth paired with the ‘soft’ landing in the housing market may prompt the BoC to retain a wait-and-see approach, and the Canadian dollar may mount a near-term recovery should Goverenor Poloz talk down speculation for lower borrowing-costs. 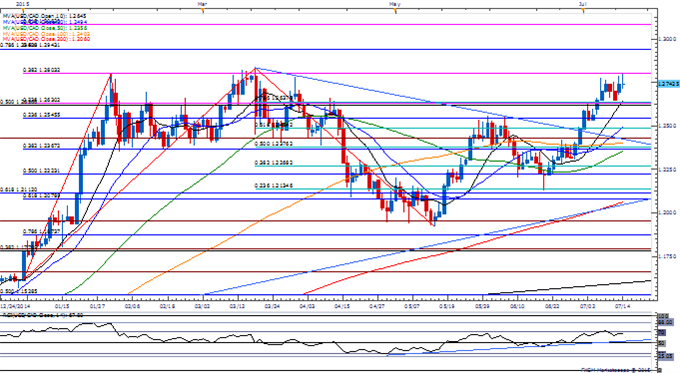 The Bank of Canada (BoC) kept the benchmark rate unchanged at 0.75% for another month in May, with Governor Stephen Poloz turning increasingly optimistic towards the economy as the central bank head anticipates a strong recovery in the second-quarter of 2015. As a result, the BoC may continue to endorse a wait-and-see approach throughout the remainder of the year as the ‘emergency’ rate cut in March works its way through the real economy. Nevertheless, the Canadian dollar struggled to hold its ground following the rate decision, with USD/CAD snapping back from the 1.2425 region to end the day at 1.2450.