- Canada Employment Expected to Contract for Third Time in 2015.

A 10.0K decline in Canada Employment along with an uptick in the jobless rate may spur fresh monthly highs in USD/CAD should the data fuel speculation for another Bank of Canada (BoC) interest rate cut.

Despite the emergency rate cut in March, BoC Governor Stephen Poloz may come under increased pressure to provide additional monetary support at the July 15 meeting, and the central bank may adopt a more dovish tone going forward should the fundamental developments coming out of the Canadian economy highlight a slowing recovery.

Slowing demand from home and abroad may push Canadian firms to scale back on hiring, and a dismal employment report may generate a further appreciation in USD/CAD as it drags on interest rate expectations.

Nevertheless, the ‘soft landing’ in the housing market paired with the pickup in building activity may encourage a further expansion in the labor market, and a batch of positive data may prompt a larger pullback in USD/CAD as it gives the BoC greater scope to preserve its current policy stance throughout 2015.

Which Currencies have been Affected by Chinese Equity Volatility? 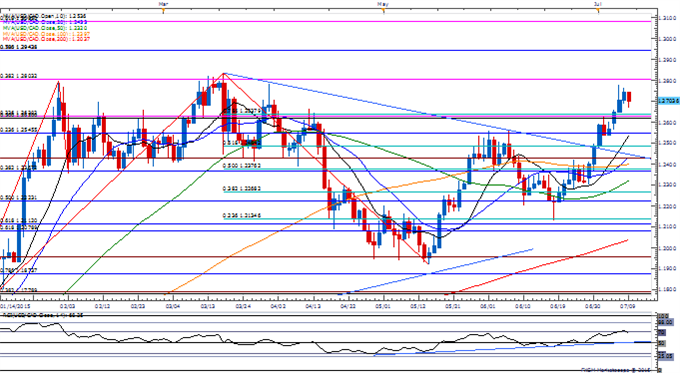 Canada Employment increased a whopping 58.9K job in May to mark the largest advance since October 2014 after shedding 19.7K jobs during the previous month. Meanwhile, the unemployment rate held steady at an annualized 6.8% for the fourth consecutive month, with the participation rate rising to 65.9% from 65.8% in April. The rebound in employment may encourage the Bank of Canada (BoC) to retain its current policy throughout 2015 following the emergency rate cut in March, and signs of a stronger recovery may encourage Governor Stephen Poloz to adopt an improved outlook for the region as the economy gets on a more sustainable path. Nevertheless, USD/CAD climbed above the 1.2550 region as U.S. Non-Farm Payrolls (NFP) also exceeded market expectations to shows a 280K advance, but USD/CAD struggled to hold above 1.2500 handle during the North American trade to end the day at 1.2432.