The Bank of England (BoE) interest rate decision may offer little relief to recent decline in GBP/USD as the central bank is widely expected to retain its current policy in July, and the committee may continue to endorse a wait-and-see approach amid the growing threat of a Greek exit.

Heightening uncertainties surrounding the Euro-Zone – the U.K.’s largest trading partner – may prompt the BoE to further delay its normalization cycle, and the British Pound may face additional headwinds in the second-half of the year should Governor Mark Carney highlight a more dovish outlook for monetary policy.

Stronger wage growth along with the narrowing slack in the real economy may encourage the BoE to adopt a more upbeat tone this time around, and the sterling may trade on a firmer footing in the second-half of 2015 should Governor Carney continue to prepare U.K. households and businesses for higher borrowing-costs.

However, the BoE may largely retain its current policy throughout the remainder of the year as the geopolitical risks surrounding the U.K. dampens the outlook for growth and inflation, and the central bank may carry the record-low interest rate into 2016 in an effort to encourage a stronger recovery. 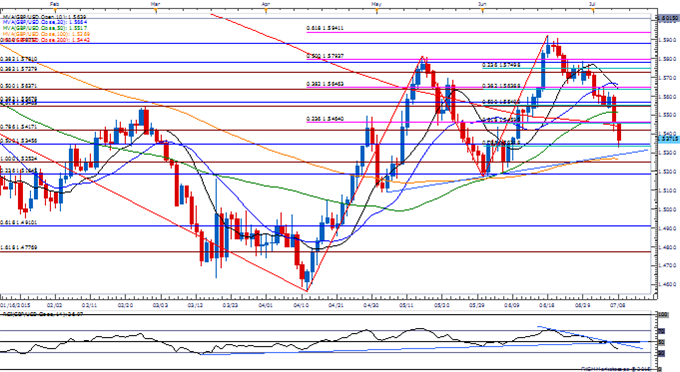 As expected, the Bank of England (BoE) refrained from releasing a policy statement as the central bank kept the benchmark interest rate steady at 0.50% in June. It seems as though the BoE will stick to the sidelines in 2015 as the committee gauges the margin of slack in the real economy, but Governor Mark Carney may continue to prepare U.K. households and businesses for higher borrowing-costs as the central bank head anticipates a stronger recovery over the coming months. The initial uptick in the sterling was short-lived, with GBPUSD struggling to hold above the 1.5400 handle and ending the day at 1.5357.