- Australia Employment Expected to Hold Flat After Marking the Second-Largest 2015 Advance in May.

An uptick in Australia’s jobless rate paired with a flat employment print may spur fresh 2015 lows in AUD/USD as fears of a slower recovery puts increased pressure on the Reserve Bank of Australia (RBA) to further embark on its easing cycle.

Even though the RBA sticks to its current policy in July, a deterioration in the labor market may fuel speculation for a further reduction in the cash rate, and the Australian dollar remains at risk of facing additional headwinds in the second-half of 2015 as Governor Glenn Stevens retains the verbal intervention on the local currency.

Australian firms may scale back on hiring amid slowing demand from home and abroad, and a dismal employment report may spur fresh yearly lows in the exchange rate as the central bank warns of below-trend growth over the policy horizon.

However, the ongoing expansion in the housing market along with the uptick in service-based activity may generate an unexpected pick up in job growth, and a positive development may heighten the appeal of the aussie as it raises the RBA’s scope to conclude its easing cycle. 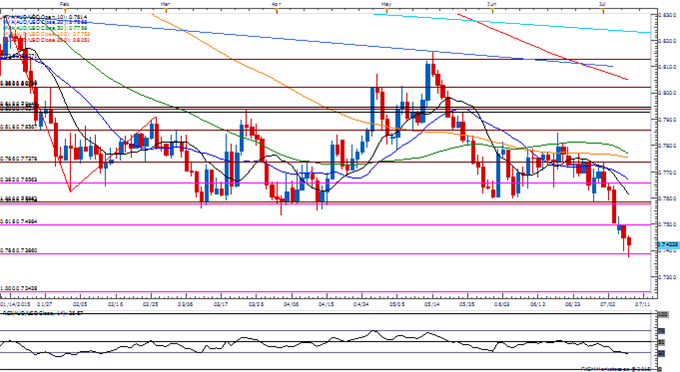 The Australian employment increased 42.0K in May after contracting a revised 13.7K the month prior, while the jobless rate unexpectedly narrowed to an annualized 6.0% to mark the lowest reading since June 2014. Signs of a stronger recovery may push the Reserve Bank of Australia (RBA) to adopt an improved out for the region, and Governor Glenn Stevens may endorse a wait-and-see approach throughout 2015 as the central bank appears to be nearing the end of its easing cycle. The Australian dollar strengthened following the positive release, with AUD/USD surging above the 0.7775 region, but the pair consolidated throughout the rest of the Asian Pacific trade to end the session at 0.7759.