Another 230K rise in U.S. Non-Farm Payrolls (NFP) along with a downtick in the jobless rate may heighten the appeal of the greenback and trigger a near-term sell-off in EUR/USD should the data put increased pressure on the Federal Open Market Committee (FOMC) to remove the zero-interest rate policy (ZIRP).

A further improvement in the labor market may boost bets for a Fed rate hike in 2015 as the U.S. economy approaches ‘full-employment,’ and we may see a growing number of central bank officials adopt a hawkish tone for monetary policy as Chair Janet Yellen remains confident in achieving the 2% inflation target over the policy horizon.

The ongoing improvement in business sentiment paired with the pickup in private-sector consumption may generate a marked expansion in U.S. job growth, and a positive development may spur a resumption of the long-term bull trend in the greenback as it boosts interest rate expectations.

However, the rise in planned job cuts along with the ongoing slack in business outputs may drag on hiring, and a dismal NFP report may prop up the euro-dollar exchange rate going into the holiday weekend as it raises the risk of seeing a further delay in the Fed’s normalization cycle. 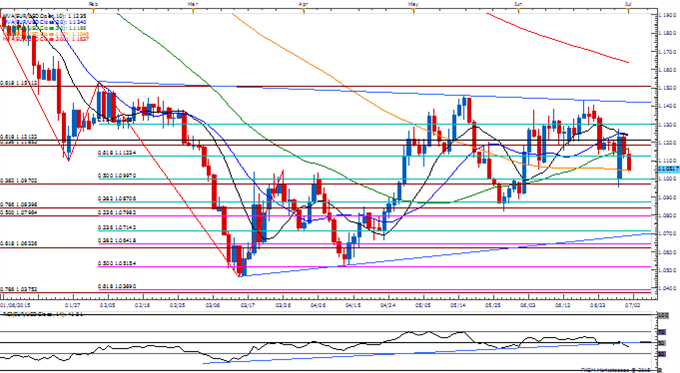 U.S. job growth picked up in May, with Non-Farm Payrolls(NFP) beating estimates as the economy added 280K jobs following the 221K the month prior. At the same time, the jobless rate unexpectedly increased to an annualized 5.5% from 5.4% as discouraged workers returned to the labor force, with the participation rate expanding to 62.9% from 62.8% during the same period. The ongoing improvement in the labor market may boost expectations for an imminent Fed rate hike, but the central bank may look to further delay the normalization cycle as it struggles to achieve the 2% target for inflation. The greenback strengthened following the better-than-expected release, with EUR/USD dipping below the 1.1100 handle, but the pair consolidated throughout the remainder of the North American trade as it ended the day at 1.1107.