- Employment Component Expanded in May After Contracting the Month Prior.

Another uptick in the ISM Manufacturing survey may boost the appeal of the greenback and trigger a more meaningful pullback in EUR/USD as it boosts speculation for Fed liftoff in the second-half of 2015.

Positive developments coming out of the world’s largest economy may put increased pressure on the Federal Open Market Committee (FOMC) to remove the zero-interest rate policy (ZIRP), and we may see a growing number of central bank officials prepare U.S. households and businesses for higher borrowing-costs as the region gets on a more sustainable path.

Improved business confidence paired with the pickup in household spending may produce a meaningful advance in the ISM survey, and a better-than-expected print may generate a bullish USD reaction as market participants ramp up bets for a Fed rate hike later this year.

Nevertheless, the ongoing slack in the real economy may continue to drag on business output, and a dismal manufacturing report may produce near-term headwinds for the greenback as it raises the Fed’s scope to retain its highly accommodative policy stance beyond 2015. 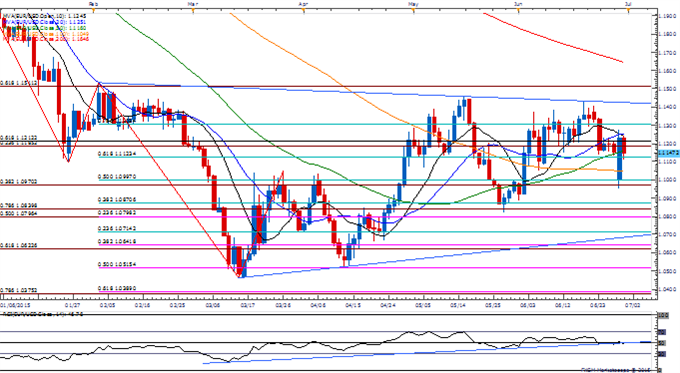 The U.S. ISM Manufacturing survey increased for the first time since October as the index climbed to 52.8 in May from 51.5 the month prior. A deeper look at the report showed a pickup in New Orders as the figure advanced to 55.8 from 53.5 in April, with the Employment component bouncing back to 51.7 during the same period after marking the contraction since May 2013. The bullish dollar reaction to the better-than-expected ISM report pushed EUR/USD below the 1.0900 handle, but the pair consolidated throughout the North American trade to end the day at 1.0923.