An upward revision in the U.K. 1Q Gross Domestic Product (GDP) report may heighten the appeal of the British Pound and spur a near-term advance in GBP/USD as it puts increased pressure on the Bank of England (BoE) to normalize monetary policy sooner rather than later.

Signs of a stronger recovery may spur a growing dissent within the Monetary Policy Committee (MPC) as board member Martin Weale sees scope to raise the benchmark interest rate as early as August, and we may see a growing number of BoE officials adopt a hawkish tone over the coming months should the fundamental developments coming out of the U.K. boost the outlook for growth and inflation.

The pickup in private sector consumption along with the expansion in business outputs may generate a strong growth figure, and a marked upward revision may boost interest rate expectations as the BoE remains on course to normalize monetary policy.

However, the slowdown in building activity along with the softening in private-sector credit may lead to a lackluster GDP print, and fears of a slower recovery may drag on the British Pound as it gives the central bank greater scope to retain its wait-and-see approach throughout 2015.

For LIVE SSI Updates Ahead of the U.K. GDP Print, Join DailyFX on Demand 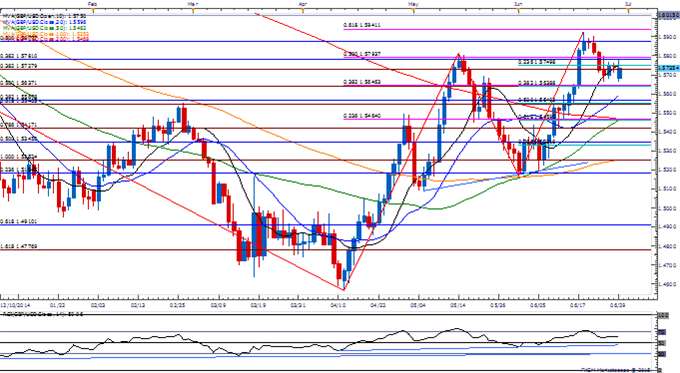 Impact that the U.K. GDP report has had on GBP/USD during the last release

The final 4Q U.K. Gross Domestic Product (GDP) report showed an unexpected upward revision in the growth rate, with the economy expanding an annualized 3.0% amid an initial forecast for a 2.7% print. The better-than-expected reading was largely driven by exports, which increased by 4.6% over the last three-months of 2014. Signs of a stronger recovery may encourage the Bank of England (BoE) to adopt a more hawkish tone in 2015, but the committee may continue to endorse a wait-and-see approach over the near to medium-term as the central bank highlights the ongoing slack in the real economy. The initial bullish market reaction was short-lived, with GBP/USD struggling to push above the 1.4800 handle, but the sterling gained ground going into the North American trade, with the pair ending the day at 1.4814.