EUR/USD to Give Back June Advance on Higher U.S. Income, Sticky PCE

- Core Rate of Inflation to Hold at Annualized 1.8% for Third Consecutive Month.

Sticky inflation along with a pickup in Personal Income & Spending may heighten demand for the greenback and trigger a near-term decline for EUR/USD as it boosts bets for Fed rate hike in September.

Positive developments coming out of the world’s largest economy may keep the Federal Open Market Committee (FOMC) on course to normalize monetary policy later this year, and we may see a growing number of central bank officials adopt a more hawkish tone on the back of a stronger recovery.

The ongoing improvement in the labor market paired with the pickup in household consumption may generate a slew of better-than-expected data prints, and the dollar may continue to recoup the losses from earlier this month should the developments fuel bets for higher borrowing-costs.

However, the persistent lack in the real economy accompanied with the disinflationary environment may become a growing concern for the Fed, and signs of a slower recovery may drag on interest rate expectations as Chair Janet Yellen remains in no rush to remove the zero-interest rate policy (ZIRP). 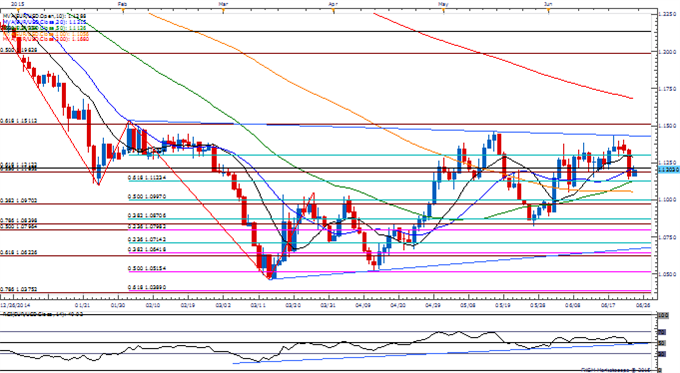 The core Personal Consumption Expenditure (PCE), the Fed’s preferred gauge for inflation, unexpected slowed to an annualized 1.2% from 1.3% in April, while Personal Spending remained flat following a revised 0.5% advance the month prior. In contrast, Personal Income exceeded market forecasts for a 0.3% print as wage growth increased 0.4% during the same period. Nevertheless, the mixed batch of data prints coming out of the U.S. economy raises the risk for a further delay in the Fed’s normalization cycle as the developments point to a slowing recovery. The greenback struggled to hold its ground following the data prints, but the reserve currency snapped back during the North American trade, with EUR/USD slipping below the 1.0950 region to end the day at 1.0923.