Another upward revision to the 1Q U.S. Gross Domestic Product (GDP) report may boost the greenback’s appeal and spark a larger decline in EUR/USD as it fuels speculation for the Federal Open Market Committee (FOMC) to remove the zero-interest rate policy (ZIRP) at the September meeting.

Even though the Fed remains on course to raise the benchmark interest rate in 2015, signs of a slower recovery raises the risk for a further delay in the normalization cycle as the central bank remains in no rush to switch gears.

The pickup in household consumption paired with the expansion in building activity may generate a strong GDP report, and a positive development may boost interest rate expectations as the Fed prepares U.S. households and businesses for higher borrowing costs.

However, slowing outputs along with the ongoing weakness in business investments may continue to drag on the real economy, and a dismal print may drag on the greenback as it dampens the likelihood for the Fed liftoff at the September 17 meeting. 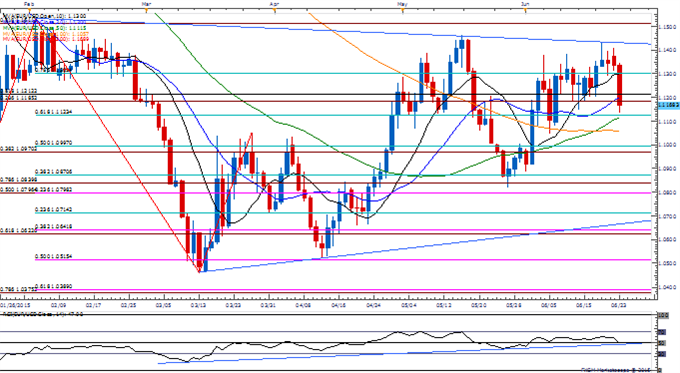 The final 4Q U.S. Gross Domestic Product (GDP) report fell short of market expectations as the economy grew at an annualized rate of 2.2% amid forecasts for an upward revision to 2.4%. In contrast, Personal Consumption was revised higher to 4.4% from an initial forecast of 4.2%, while the core Personal Consumption Expenditure (PCE), the Fed’s preferred gauge for inflation, held steady at an annualized 1.1% to mark the slowest pace of growth since 3Q 2013. Despite the ongoing slack in the real economy, the Fed may stay on course to normalize monetary policy in 2015 as the central bank anticipates a stronger recovery to emerge in the year ahead. The initial market reaction to the mixed batch of data was largely limited as EUR/USD held below the 1.0900 handle, with the pair largely consolidating throughout the North American session to the day at 1.0885.