- Core Rate of Inflation to Slow for Second Straight Month to Annualized 2.1%.

Despite forecasts for another 0.8% print for Canada’s headline Consumer Price Index (CPI), a slowdown in the core rate of inflation may drag on the loonie and encourage a more bullish outlook for USD/CAD as it raises the Bank of Canada’s (BoC) scope to keep the benchmark interest rate on hold for an extended period of time.

The BoC may carry its current policy into 2016 as it continues to endorse a wait-and-see approach, but positive developments coming out of the region may put increased pressure on the central bank to further normalize monetary policy as Governor Stephen Poloz turns upbeat towards the economy.

Waning confidence paired with the ongoing weakness in household consumption may encourage U.S. firms to offer discounted prices, and a marked downtick in the CPI may generate a bearish reaction in the greenback as it drags on interest rate expectations.

Nevertheless, the expansion in service-based activity along with the pickup in private-sector credit may encourage a sticky inflation print, and a positive development may boost the appeal of the reserve currency as the Fed remains on courses to normalize monetary policy in 2015. 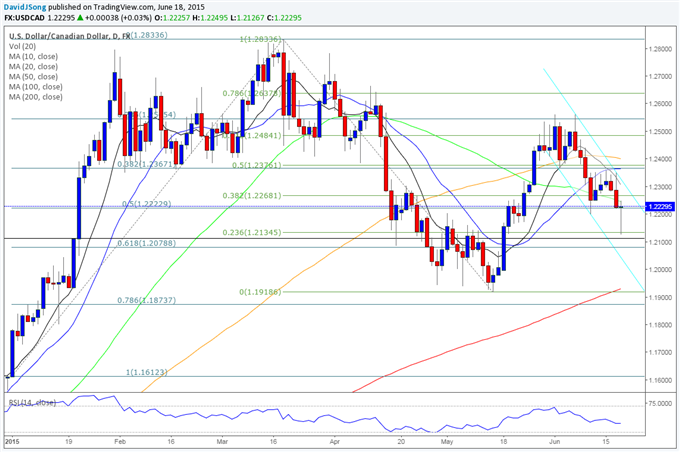 Canada’s Consumer Price Index (CPI) unexpectedly slowed to an annualized 0.8% in April to mark the lowest reading since October 2013, while the core rate of inflation also fell short of market estimate as the reading narrowed to 2.3% from 2.4% the month prior. A deeper look at the report showed the slowdown was largely driven by a decline in energy prices along with discounted prices for clothing and footwear. Despite the temporary factors dragging on the economy, it seems as though the Bank of Canada (BoC) will largely retain a neutral policy stance throughout 2015 following the insurance rate cut in January as Governor Stephen Poloz endorses a wait-and-see approach. The Canadian dollar struggled to hold its ground following the disappointing prints, with USD/CAD surging above the 1.2250 region to close the day at 1.2277.