The updated forecasts coming out of the Federal Open Market Committee (FOMC) meeting may generate a bullish reaction in the greenback and spur downside pressures for EUR/USD should the central bank show a greater disposition to remove the zero-interest rate policy (ZIRP) in 2015.

Why Is This Event Important:As the Fed remains on course to switch gears, market participants may pay increased attention to the Fed’s interest rate dot-plot in an effort to gauge the pace of the normalization cycle, but a more gradual trajectory for U.S. borrowing-costs may dampen the appeal of the reserve currency as it drags on rate expectations.

The Fed may continue to highlight an upbeat outlook for the U.S. economy as the central bank anticipates a stronger recovery to emerge in the second-half of the year, and the fresh forecasts may help the greenback resume the bullish trend from earlier this year should the dot-plot remain centered around 0.50% to 0.75% for 2015.

Nevertheless, we may see a growing number of Fed officials show a greater willingness to retain the ZIRP for an extended period of time, and the central bank may sound more dovish this time around as the ongoing slack in the real economy limits the committee’s scope to achieve the 2% inflation target over the policy horizon. 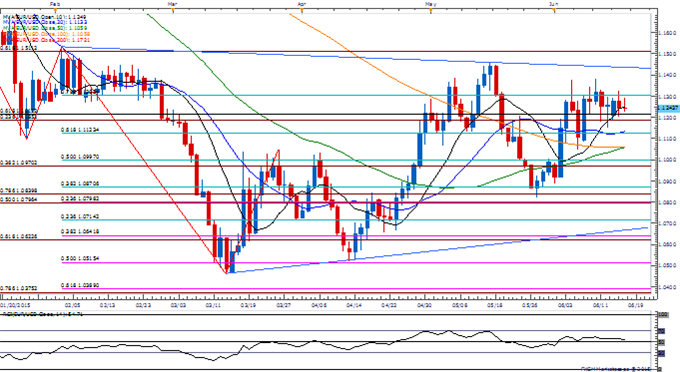 Price & Time: Looking To The Fed For Direction

Despite fears of a slowing recovery, the Federal Open Market Committee (FOMC) largely struck an upbeat outlook for the region and pledged to look past the ‘transitory factors’ dragging on the real economy as the central bank anticipates a stronger recovery to materialize in the months ahead. Despite the risk of seeing the Fed retain the zero-interest rate policy (ZIRP) beyond mid-2015, it seems as though the central bank will stay on course to normalize policy later this year as Chair Janet Yellen remains confident in achieving the 2% target for inflation over the policy horizon. The greenback strengthened following the upbeat comments from the Fed, with EURUSD dipping down below the 1.1100 handle, but the market reaction largely fizzled ahead of the close as the pair ended the session at 1.1127.