- Core Rate of Inflation to Pick Up for First Time Since December 2014.

An uptick in the headline & core U.K. Consumer Price Index (CPI) may spur fresh monthly highs in GBP/USD as it raises the Bank of England’s (BoE) scope to remove the record-low interest rate sooner rather than later.

BoE Governor Mark Carney may sound increasingly hawkish over the coming months as the central bank head anticipates stronger price growth in the second-half of 2015, and we may see a growing number of Monetary Policy Committee (MPC) officials prepare U.K. households & businesses for higher borrowing-costs as the economy gets on a firmer footing.

U.K. firms may boost consumer prices amid stronger wage growth along with the expansion in private-sector credit, and a strong inflation report may instill a more bullish outlook for the sterling as the BoE remains on course to normalize monetary policy.

However, waning confidence paired with falling input costs may continue to drag on price growth, and a dismal CPI print may undermine the near-term breakout in GBP/USD as market participants push back bets for a BoE rate hike. 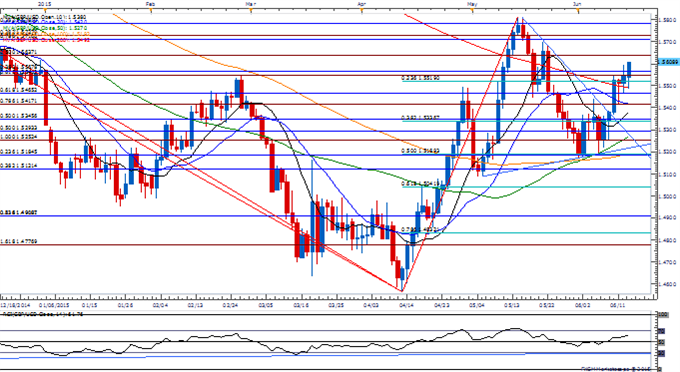 The U.K. Consumer Price Index (CPI) contracted for the first time since 1960 as price growth slipped an annualized 0.1% in April, while the core rate of inflation slowed to a 9-year low of 0.8% after expanding 1.0% the month prior. The low-inflationary environment runs the risk of seeing a further delay in the Bank of England’s (BoE), but it seems as though the central bank will largely stay on course to normalize monetary policy over the near to medium-term as the board anticipates a stronger recovery later this year. The initial market reaction was limited and short lived, with GBP/USD dipping below 1.5550 to end the day at 1.5510.