NZD/USD Bearish Formation at Risk on Upbeat RBNZ- 0.7300 in Focus

A Bloomberg News survey shows 10 of the 16 economists polls forecast the Reserve Bank of New Zealand (RBNZ) to keep the cash rate on hold at 3.50%, but a meaningful shift in the forward-guidance for monetary policy may instill a more bearish outlook for NZD/USD should the central bank show a greater willingness to revert back to its easing cycle.

Fears of a slower global recovery may encourage the RBNZ to strike a more cautious tone this time around, and the New Zealand dollar remains at risk of facing additional headwinds over the near to medium-term should Governor Graeme Wheeler boost market expectations for a rate cut.

Waning confidence paired with the weakening outlook for the inflation may prompt the RBNZ to further support the real economy, and the bearish sentiment surrounding the kiwi may gather pace over the near-term should the central bank reverse the rate hikes from back in 2014.

However, the RBNZ may largely retain a wait-and-see approach throughout 2015 amid increased demand from home and abroad, and the New Zealand dollar may face a near-term rebound should Governor Wheeler talk down bets for lower borrowing-costs. 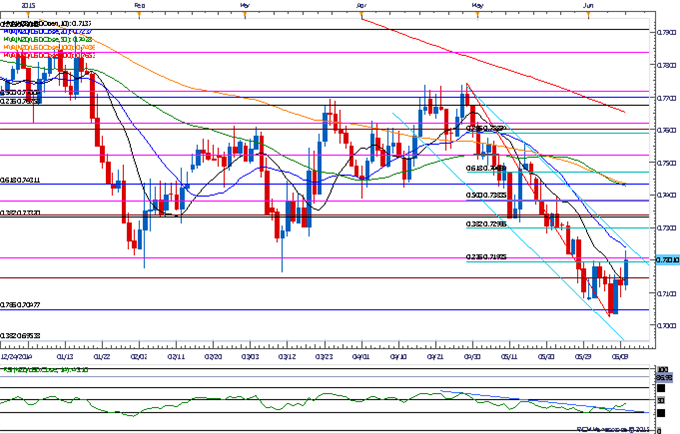 As expected, the Reserve Bank of New Zealand (RBNZ) kept the Official Cash Rate (OCR) unchanged at 3.50%, but Governor Graeme Wheeler struck a rather cautious outlook for the region, with the central bank head highlighting a risk for lower borrowing-costs should the outlook for growth and inflation deteriorate. The dovish twist to the forward-guidance for monetary policy dragged on the New Zealand dollar, with NZD/USD dipping below the 0.7650 region to end the Asia/Pacific trade at 0.7599.