Another 225K expansion in U.S. Non-Farm Payrolls (NFP) may boost the appeal of the greenback and trigger a near-term decline in EUR/USD as signs of a stronger economic recovery fuels expectations for higher borrowing-costs in the world’s largest economy.

A further improvement in the labor market may put increased pressure on the Federal Open Market Committee (FOMC) to remove the zero-interest rate policy (ZIRP) sooner rather than later, but the ongoing slack in the real economy may encourage the central bank to push back its normalization cycle in an effort to stem the downside risks surrounding the region.

Improved confidence paired with the pickup in production may generate a strong NFP print, and a marked expansion in job growth may drive a near-term rally in the dollar as it boosts interest rate expectations.

However, the ongoing weakness in private-sector consumption may encourage U.S. firms to scale back on hiring, and a dismal batch of data may undermine the near-term outlook for the reserve currency as it gives the Fed greater scope to retain the highly accommodative policy stance for an extended period. 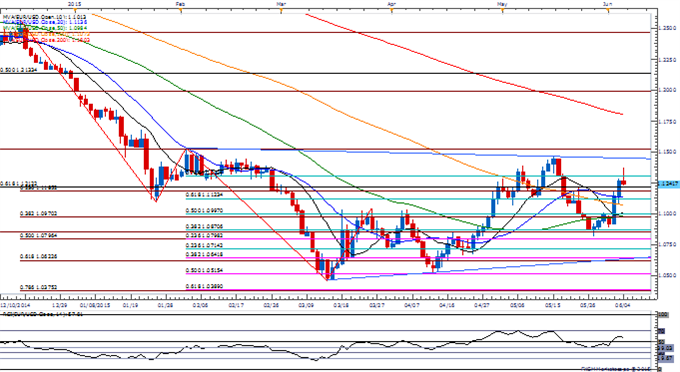 The U.S. labor market showed a more meaningful pickup in April as Non-Farm Payrolls (NFP) increased 223K after climbing a revised 85K the month prior, the slowest pace of growth since July 2012. At the same time, the unemployment rate slipped to an annualized 5.4% from 5.5% despite an uptick in participation rate, while Average Hourly Earnings climbed to 2.2% from 2.1% during the same period amid forecasts for 2.3% clip. The ongoing recovery in the labor market may encourage the Fed to raise the benchmark interest rate later this year, but we may see a growing number of central bank officials favor a further delay in the normalization cycle as the committee struggles to achieve the 2% target for inflation. The initial market reaction was short-lived as EURUSD quickly snapping back above the 1.1200 handle, with the pair consolidating throughout the North American session to end the day at 1.1208.