- Will ECB President Mario Draghi Continues Speak Out Against a ‘Taper Tantrum?’

The fresh batch of rhetoric coming out of the European Central Bank (ECB) may boost the appeal of the single-currency and spur a further advance in EUR/USD should the Governing Council adopt an improved outlook for the monetary union.

Why Is This Event Important:Data prints highlighting a stronger recovery in Europe may encourage the ECB to strike a more upbeat tone this time around, but the threat for a ‘taper tantrum’ in the euro-area may push Mr. Draghi to cast a dovish outlook for monetary policy as the central bank head pledges to carry out the easing cycle until at least September 2016.

Faster price growth paired with the pickup in lending for small and medium-sized enterprises (SME) may prompt the Governing Council to soften its dovish tone, and the ECB hawks may look to halt the easing cycle ahead of schedule as the positive developments highlight an improved outlook for growth and inflation.

Nevertheless, the ECB may retain a cautious outlook for the region amid waning demand from home and abroad, and President Draghi may largely preserve his pledge to fully implement the quantitative easing (QE) program in an effort to encourage a stronger recovery. 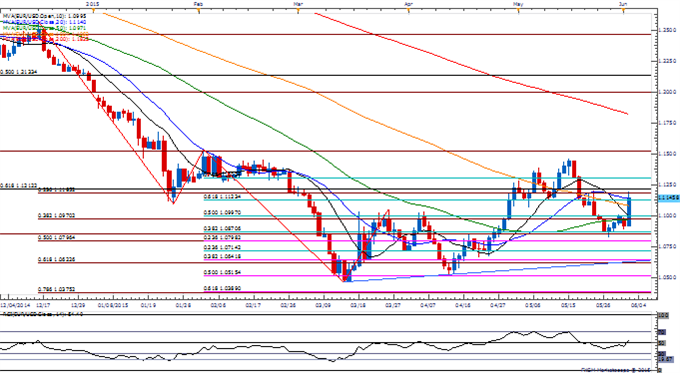 The European Central Bank (ECB) stuck to its current policy in April, and it seems as though the Governing Council will retain a wait-and-see approach over the coming months as President Mario Draghi sees the non-standard measures starting to have a positive impact on the Euro-Zone economy. Despite the positive data prints coming out of the region, Mr. Draghi pledged to fully implement the QE program through September 2016 in an effort to achieve its one and only mandate to achieve price stability. The initial market reaction to the announcement was limited, with EUR/USD fluctuating between 1.0600 and 1.0700 during the North American trade, and ending the day at 1.0684.