- Will Governor Glenn Stevens Toughen the Verbal Intervention on the Australian Dollar?

According to a Bloomberg News survey, all of the 29 economists polled forecast the Reserve Bank of Australia (RBA) to keep the cash rate on hold at 2.00%, but the policy statement may drag on AUD/USD as the central bank keeps the door open to further embark on its easing cycle.

The dovish outlook for monetary policy along with the ongoing verbal intervention on the Australia dollar certainly raises the risk of for a further decline in the exchange rate, and we may see Governor Glenn Stevens increase his efforts to further support the rebalancing of the real economy in order to encourage a stronger recovery.

The ongoing decline in business investments paired with slowing demand from home and abroad may encourage the RBA to adopt a more dovish tone, and the aussie remains at risk of facing additional headwinds over the near-term as the central bank sees scope to further reduce the cash rate if needed.

However, the RBA may retain its wait-and-see approach in June on the back of sticky price growth, and Governor Stevens may endorse a more neutral outlook for monetary policy as the pickup in inflation expectations limits the central bank’s scope to further support the real economy.

Scalp Webinar: Key Levels on USD Crosses in Focus Ahead of NFP 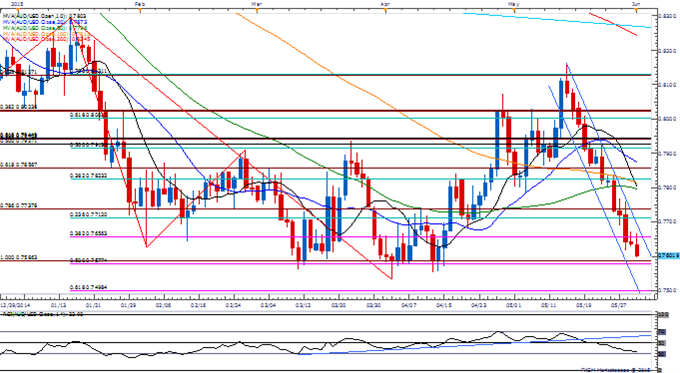 As expected, the Reserve Bank of Australia (RBA) cut the benchmark rate for a second time in 2015 to a fresh record-low of 2.00% in May, but largely refrained from laying out a new forward-guidance for monetary policy as the central bank retained the verbal intervention on the local currency. With that said, it seems as though the RBA will adopt a wait-and-see approach over the coming months as the rate cuts continue to work their way through the real economy. The initial market reaction to the rate cut was short-lived as the RBA scaled back its dovish forward-guidance for monetary policy, with AUDUSD quickly snapping back from the 0.7800 handle to end the Asia/Pacific trade at 0.7867.