A marked downward revision in the preliminary 1Q U.S. Gross Domestic Product (GDP) report may drag on the greenback and spur a near-term rebound in EUR/USD as the Federal Reserve looks to carry its zero-interest rate policy into the second-half of 2015.

Even though the Fed pledges to look past the economic weakness drive by transitory factors, a larger-than-expected contraction in the growth rate may spur a further delay in the central bank’s normalization cycle as it undermines expectations for a stronger recovery.

Waning demand from home and abroad may become a growing concern for the Fed amid the ongoing slack in the real economy, and a dismal GDP report may dampen the appeal of the greenback as it drags on interest rate expectations.

Nevertheless, increased business outputs paired with the expansion in private-sector credit may offer a better-than-expected GDP print, and prospects for a stronger recovery may spur a bullish reaction in the dollar as the Fed remains on course to remove the zero-interest rate policy (ZIRP) in 2015. 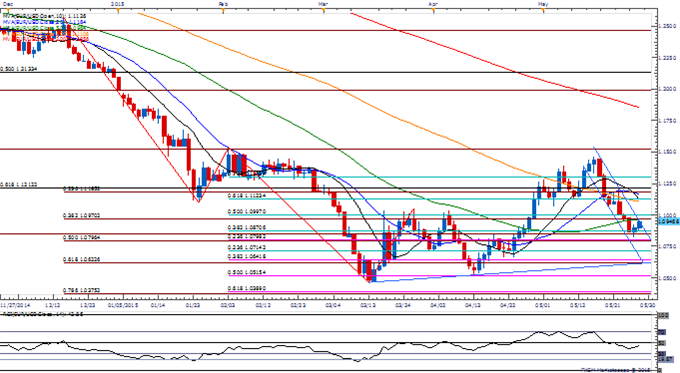 Even though the preliminary 4Q U.S. GDP print was revised down to an annualized 2.2% from an initial forecast of 2.6%, the print still managed to exceed market expectations for a 2.0% rate of growth. At the same time, Personal Consumption was also revised down to 4.2% from 4.3%, while the core Personal Consumption Expenditure (PCE) remained unchanged at 1.1% during the same period. The better-than-expected GDP reading may keep the Fed on course to normalize monetary policy in 2015 as the central bank anticipates a stronger recovery in the year ahead. The greenback strengthened following the report, with EUR/USD slipping below the 1.1200 handle to end the North American session at 1.1189.