An upward revision in the U.K. 1Q Gross Domestic Product (GDP) print may heighten the appeal of the British Pound and spur a near-term rebound in GBP/USD as signs of a stronger recovery raises the Bank of England’s (BoE) scope to normalize monetary policy sooner rather than later.

A marked uptick in the growth rate may spur a growing dissent within the Monetary Policy Committee (MPC) as the central bank remains on course to normalize monetary policy, and we may see a greater number of BoE officials prepare U.K. households and business for higher borrowing-costs as the economy gets on a firmer footing.

For LIVE SSI Updates Ahead of the U.K. GDP Print, Join DailyFX on Demand

The pickup in business outputs along with the ongoing improvement in the labor market may stoke a larger-than-expected upward revision in the growth rate, and a positive development may produce a bullish reaction in the sterling as it boosts interest rate expectations.

However, the widening trade deficit paired with the ongoing slack in private-sector activity may drag on the growth rate, and a dismal GDP figure may further delay the BoE’s normalization cycle especially on the back of the uncertainties clouding the outlook for fiscal policy. 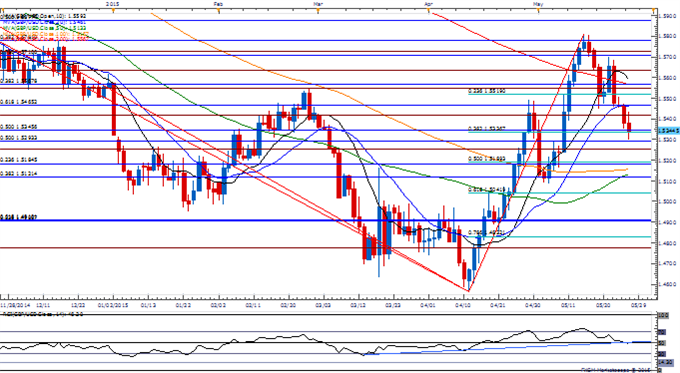 Impact that the U.K. GDP report has had on GBP/USD during the last release

The U.K. Gross Domestic Product (GDP) report was largely in-line with market expectation as the economy grew another annualized 2.7% during the last quarter of 2014. Even though the BoE remains on course to normalize monetary policy, the Bank of England (BoE) may retain its wait-and-see approach throughout 2015 as the ongoing slack in the real economy dampens the outlook for growth and inflation. The initial market reaction in the British Pound was short-lived, with GBPUSD sliding below the 1.5500 handle and ending the day at 1.5402.