- Will Governor Stephen Poloz Continue to Highlight an Improved Outlook?

The Bank of Canada (BoC) interest rate decision may boost the appeal of the loonie and spur a pullback in USD/CAD should the central bank adopt a more hawkish tone for monetary policy.

Expectations for a stronger recovery may encourage BoC Governor Stephen Poloz to highlight an improved outlook for the region, and the central bank may show a greater willingness to move away from its wait-and-see approach as it anticipates the positive dynamics underling the real economy to ‘reassert themselves during the second quarter, and to do so clearly in the second half of the year.’

The BoC may release a more hawkish statement amid the pickup in private-sector activity, and a material shift in the forward-guidance may produce a near-term correction in USD/CAD as market participants boost the interest rate outlook.

However, slowing inflation paired with the weakness in global trade may push the BoC to largely retain its current policy throughout 2015, and the Canadian dollar may continue to underperform against its U.S. counterpart should Governor Poloz endorse a neutral stance for monetary policy. 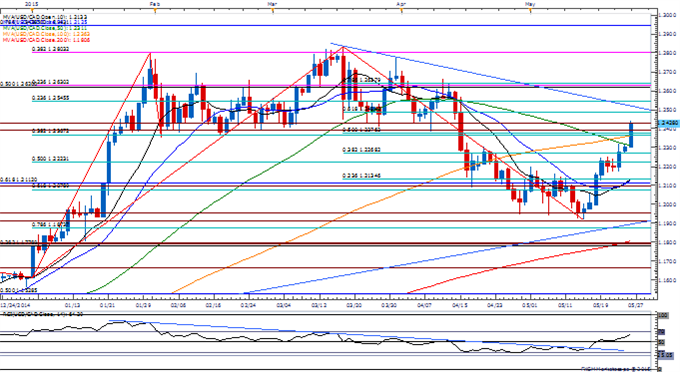 As expected, the Bank of Canada (BoC) kept the benchmark rate unchanged at 0.75% in April. Despite the neutral stance, BoC Governor Stephen Poloz appears to be turning increasingly optimistic towards the region as the central bank head looks through the recent weakness in the real economy and anticipates a stronger recovery in the second-quarter of 2015. The Canadian Dollar strengthened following the less-dovish statement, with USD/CAD slipping below the 1.2300 handle to end the day at 1.2273.