A pickup in U.K. Retail Sales may prompt a near-term advance in GBP/USD as the Bank of England (BoE) turns increasingly upbeat towards the economy and remains on course to normalize monetary policy.

Signs of a strengthening recovery may put increased pressure on the Monetary Policy Committee (MPC) to normalize monetary policy, and we may see a tighten with the Fed for higher rates as BoE Governor Mark Carney continues to prepare U.K. households and businesses for higher borrowing-costs.

Discounted prices paired with stronger wage growth may generate a marked expansion in household spending, and a positive development may spark a bullish reaction in the British Pound as it raises the outlook for growth and inflation.

However, waning confidence along with the ongoing slacking in the real economy may drag on consumption, and another unexpected decline may spur a near-term selloff in the sterling as market participants push back bets for a BoE rate hike. 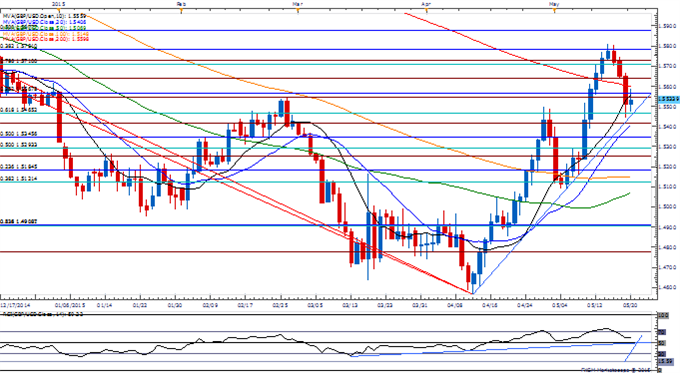 U.K. Retail Sales unexpectedly slipped 0.5% in March after climbing a revised 0.6% the month prior. At the same time, sales excluding auto fuel increased another 0.2% after expanding 0.6% in February. Despite the soft print, it seems as though the Bank of England (BoE) will stay on course to normalize monetary policy as Governor Mark Carney continues to warn of higher borrowing-costs. The initial market reaction in GBP/USD was short-lived as it climbed back above the 1.5000 handle, with the pair closing the day at 1.5034.