- Core Rate of Inflation to Hold at Annualized 1.0%- Slowest Pace of Growth Since July 2006.

The headline & core reading for the U.K. Consumer Price Index (CPI) may spur a near-term rebound in GBP/USD should the report highlight an improved outlook for price growth.

Despite the downward revision for growth, the uptick in the Bank of England’s (BoE) inflation forecast may foreshadow a better-than-expected CPI print, and the diminish risk for deflation may spur a growing dissent within the committee as Governor Mark Carney pledges to look through the transitory/seasonal factors dragging on the real economy.

U.K. firms may boost consumer prices amid stronger wage growth paired with the uptick in private-sector credit- and a strong inflation print may open up the topside targets for GBP/USD as the BoE remains on course to normalize monetary policy.

However, narrowing confidence along with slowing sales may generate a dismal CPI report, and the ongoing slack in the real economy may dampen the appeal of the British Pound and encourage the BoE to further delay normalization cycle. 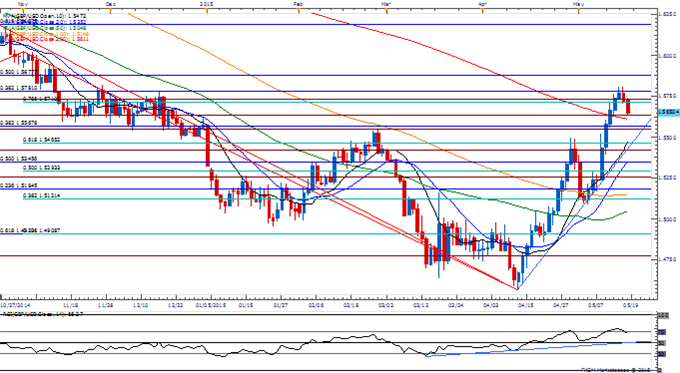 The U.K. Consumer Price Index (CPI) remained flat in March, while the core rate of inflation unexpectedly slipped to an annualized 1.0% from 1.2% the month prior to mark a 9-year low. A deeper look at the report showed discounted prices in clothing and footwear were largely offset by a rebound in energy costs. Despite the weak CPI print, the Bank of England (BoE) looks poised to retain its hawkish forward-guidance for monetary policy as Governor Mark Carney continues to prepare U.K. households and businesses for higher borrowing-costs. The bearish market reaction in GBP/USD was short-lived, with GBP/USD climbing back above the 1.4800 handle during the North American trade to end the day at 1.4751.