- Will Faster Growth Spark a ‘Taper Tantrum’ in Euro-Area?

The Euro-Zone’s 1Q Gross Domestic Product (GDP) report may heighten the appeal the single currency and spur a bullish reaction in EUR/USD as market participants anticipate a faster rate of growth in the monetary union.

Why Is This Event Important:Signs of a stronger recovery may encourage the European Central Bank (ECB) to further scale back its dovish tone for monetary policy, and the Governing Council remains at risk of facing a ‘taper tantrum’ in the second-half of the year even as central bank President Mario Draghi pledges to retain the EUR 60B/monthly purchases.

The rebound in business outputs paired with the ongoing expansion in the trade surplus may generate a strong GDP print, and a marked pickup in economic activity may spur a near-term advance in EUR/USD as market participants ramp up bets for the ECB to halt its quantitative easing (QE) ahead of schedule.

However, the GDP report may fail to meet market expectations amid the ongoing slack in the real economy, and a dismal figure may dampen the near-term outlook for EUR/USD as the ECB keeps the door open to further embark on its easing cycle. 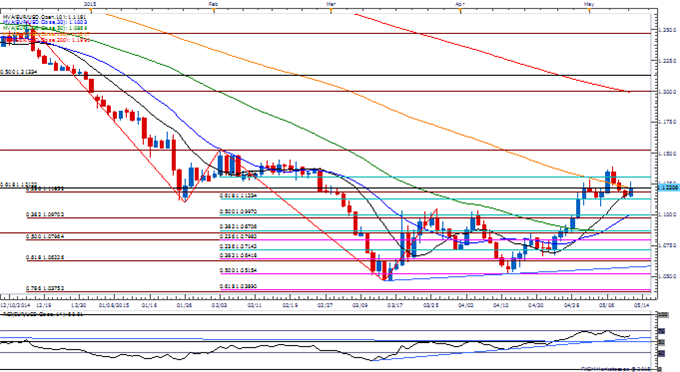 The euro-area economy grew at an annualized rate of 0.9% during the last three-months of 2014 following a 0.8% expansion during the previous quarter. The better-than-expected print was driven by a Germany, with Europe’s largest economy expanding an annualized 1.4% during the same period. The extraordinary efforts taken by the European Central Bank (ECB) may continue to prop up the monetary union as the non-standard measures continue to work their way through the real economy, and the central bank may continue to embark on its easing cycle throughout 2015 in an effort to encourage a stronger recovery. The Euro struggled to hold its ground despite the better-than-expected print, with EUR/USD slipping below the 1.1400 handle and closing the North American trade at 1.1382.