- Participation Rate to Hold Steady at 64.8% for Second-Month; Highest Since July 2014.

Another 4.0K rise in Australia Employment may heighten the appeal of the aussie and trigger a larger advance in AUD/USD as the recent shift in the forward-guidance of monetary suggests that the Reserve Bank of Australia (RBA) is nearing the end of its easing cycle.

However, a marked slowdown in job growth paired with a further expansion in the unemployment rate may undermine the near-term outlook for the higher-yielding currency and put increased pressure on the RBA to provide additional monetary support in an effort to encourage a stronger recovery.

The rebound in building activity may encourage a positive employment report, and a further expansion in the labor market may prompt fresh monthly highs in AUD/USD especially as the RBA adopts an improved outlook for the region.

However, slowing demand from home and abroad may push Australian firms to scale back on hiring, and a slowdown in job growth may renew bets for additional monetary support amid the ongoing weakness in the real economy.

Price & Time: Buy the Dip or Sell The Rip? 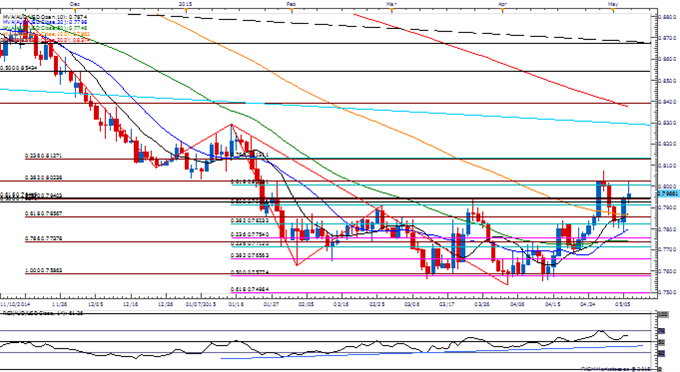 The Australian employment largely exceeded market forecast as the economy added another 37.7K jobs in March following the revised 42.0K expansion the month prior. At the same time, the jobless rate dropped to 6.1% from a revised 6.2%, with the participation rate climbing to 64.8% from 64.7% to mark the highest reading since July. Despite the ongoing improvements in the labor market, the Reserve Bank of Australia (RBA) may continue to embark on its easing cycle as Governor Glenn Stevens keeps the door open to further reduce the cash rate. The initial bullish reaction in the Australian dollar was short-lived as AUD/USD struggled to hold above the 0.7775, with the pair consolidating throughout the Asia/Pacific trade to end the session at 0.7740.