- 1Q Australia Retail Sales of 0.8% to Mark the Slowest Pace of Growth Since the Contraction in 2Q 2014.

- Household Spending to Expand for Tenth-Consecutive Month in March.

A 0.8% expansion in Australia 1Q Retail Sales may foster a further advance in AUD/USD as the Reserve Bank of Australia (RBA) appears to be approaching the end of its easing cycle.

It seems as though the RBA is largely changing its tune for monetary policy as Governor Glenn Stevens turns increasingly optimistic towards the real economy, and a further expansion in private-sector consumption may encourage the central bank to adopt a more hawkish tone over the medium-term as the region gets on a firmer footing.

The pickup in job growth paired with the expansion in private sector credit may generate a strong sales print, and positive dynamics coming out of the economy should boost the appeal of the higher-yielding currency amid the shift in the policy outlook.

However, sticky prices along with waning confidence may push Australian households to scale back on spending, and a marked slowdown in private consumption may keep the aussie capped ahead of the region’s employment report as market participants weigh the fundamental outlook for the region. 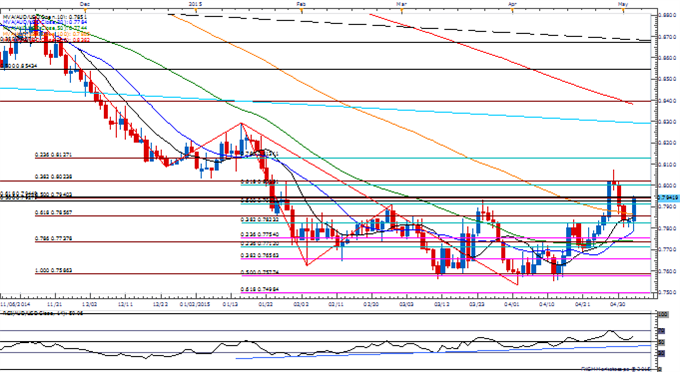 Australia Retail Sales grew 1.5% during the last three-months of 2014 to mark the fastest pace of growth since 2Q 2013. Despite the better-than-expected print, the Reserve Bank of Australia (RBA) may further reduce the benchmark rate in 2015 amid the downside risks surrounding the region, and the Australian dollar remains at risk of facing additional headwinds over the near to medium-term as the Governor Glenn Stevens retains the verbal intervention on the local currency. Nevertheless, the Australian dollar failed to benefit from the retail sales figure as AUD/USD struggled to hold above the 0.7750 figure, but the pair bounced back during the Asian Pacific tradeto end the session at 0.7787.