- Will Governor Glenn Stevens Toughen the Verbal Intervention as AUD/USD as Well?

According to a Bloomberg News survey, 25 of the 29 economists polled anticipate the Reserve Bank of Australia (RBA) to reduce the cash rate by 25bp to 2.00%, and another round of easing may prompt a further decline in AUD/USD amid the deviation in the policy outlook.

The RBA may take additional steps to combat the downside risks surrounding the region as Governor Glenn Stevens keeps the door open to offer lower borrowing-costs, and the central bank may also look to toughen its verbal intervention on the local currency in an effort to further assist with the rebalancing of the real economy.

Waning confidence along with fears of a slowing recovery may push the RBA to further support the $1T economy, and another round of monetary easing may dampen the appeal of the aussie especially if the central bank keeps the door open to push the cash rate to fresh record-lows.

However, the RBA may retain its current policy in May amid sticky price growth paired with the pickup in private-sector activity, and the aussie-dollar may continue to retrace the decline from the beginning of the year should Governor Stevens endorse a wait-and-see approach. 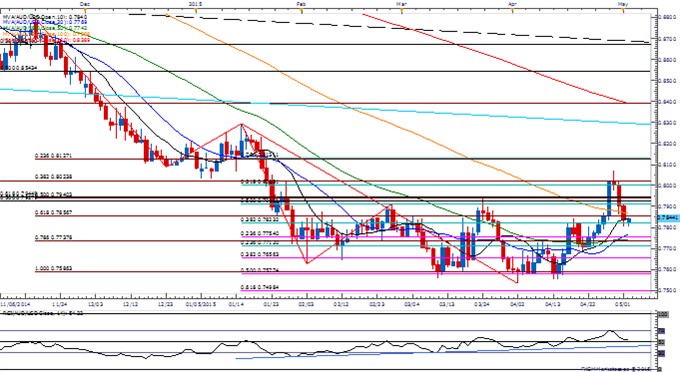 The Reserve Bank of Australia (RBA) retained the benchmark rate at 2.25%, but kept the door open to further embark on its easing cycle in an effort to further assist with the rebalancing of the real economy. The RBA continued to highlight the risk for below-trend pace amid the slowdown in global growth, but Governor Glenn Stevens may continue to promote a wait-and-see approach in the first-half of 2015 as the Australian dollar exchange rate works it was towards the 0.7500, the preferred exchange rate outlined by the central bank head. The Australian Dollar strengthened following the rate decision, with AUD/USD climbing above the 0.7700 handle, but the market reaction quickly fizzled as the pair largely consolidated over the remainder of the Asian/Pacific trade to end the session at 0.7669.