Strong ISM Manufacturing to Drag on EUR/USD Advance- 1.1000 on Radar

A pickup in the ISM Manufacturing survey may boost the appeal of the greenback and spur a near-term pullback in EUR/USD as the Federal Reserve anticipates a stronger recovery in the second-quarter of 2015.

Despite speculation for a further delay in the Fed’s normalization cycle, the central bank remains on course to remove the zero-interest rate policy (ZIRP) over the coming months, and a meaningful expansion in the ISM survey may fuel interest rate expectations as the central bank keeps the June 17 meeting on the table for liftoff.

U.S. firms may crank up production on the back of easing input costs, and a positive development may prop up the near-term outlook for the greenback especially as the Fed remains ‘data dependent.’

Nevertheless, fears of a slowing recovery paired with the ongoing weakness in private-sector consumption may prompt businesses to trim their outputs, and a dismal manufacturing report may spark another wave of dollar weakness as market participants push back bets for the Fed’s first rate hike. 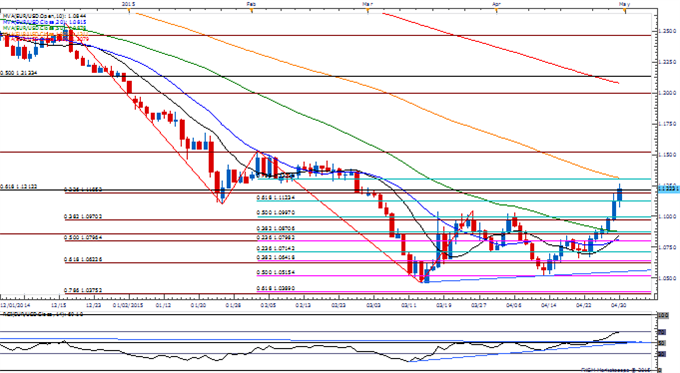 U.S. ISM Manufacturing survey narrowed for the seventh-consecutive months in March as the index slipped to 51.5 from 52.9 the month prior. Most sectors slowed from the month prior, while the gauge for export orders, customer inventories and backlog of orders printed below 50, indicating a contraction. Even though the Fed remains on course to normalize monetary policy, the ongoing slack in the real economy may prompt the central bank to carry its zero-interest rate policy (ZIRP) beyond mid-2015 in an effort to encourage a stronger recovery. The initial spike lower in EUR/USD was short-lived as the pair worked its way back towards the 1.0775 region, but the rebound failed to gather pace following the European close as the pair ended the day at 1.07662.