- Will the Fed Further Delay and Talk Down Bets for June Rate Hike?

The fresh commentary coming out of the Federal Open Market Committee (FOMC) may fuel the near-term selloff in the greenback and produce a further advance in EUR/USD should the central bank show a greater willingness to carry its current policy into the second-half of 2015.

Why Is This Event Important:Even though the Fed remains on course to remove the zero-interest rate policy (ZIRP), a further delay of the normalization cycle may produce further headwinds for the greenback while boosting risk appetite as Janet Yellen and Co. retain a cautious outlook for the U.S. economy.

Waning confidence along with the ongoing weakness in private-sector consumption may push the Fed to retain the highly accommodative policy stance beyond mid-2015, and a fresh wave of dovish comments may raise the risk for a further decline in the greenback as interest rate expectations deteriorate.

Nevertheless, we may largely get more of the same from the Fed as the central bank anticipates a stronger recovery to materialize later this year, and the policy statement may help to heighten the appeal of the greenback should the committee continue to see scope for a June rate hike. 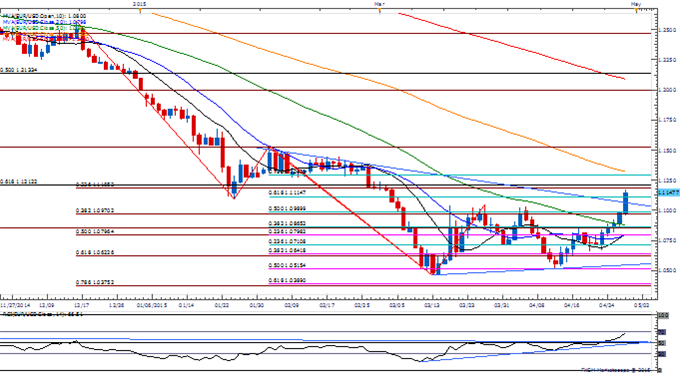 Even though the Federal Open Market Committee (FOMC) stuck to its current policy in March, the central bank removed the ‘patient’ language from the forward-guidance for monetary policy as the central bank looks to normalize monetary policy in mid-2015. At the same time, the Fed downgraded the outlooks for growth and inflation amid the negative spillover effects from low oil prices/strong U.S. dollar. Chair Janet Yellen reiterated that it would be appropriate to raise the interest rate when the labor market improves further, and went onto say that the committee remains confident achieving the 2% target for inflation as central bank officials anticipate a stronger recovery later this year. The bearish dollar reaction was short-lived as EUR/USD quickly snapped back from the 1.1000 to end the day at 1.0767.