- Bank of England (BoE) Retains Current Policy Ahead of May 7 Election.

-Will There Be a Growing Dissent Within the Monetary Policy Committee (MPC)?

The Bank of England (BoE) Minutes may heighten the appeal of the British Pound and generate a larger rebound in GBP/USD should the fresh batch of central bank rhetoric boost interest rate expectations.

However, we may get more of the same from Governor Mark Carney and Co. as the May 7 election clouds the fiscal outlook for the U.K., and we may continue to see a unanimous vote to retain a wait-and-see approach amid the ongoing slack in the real economy.

Improved confidence along with the ongoing expansion in private-sector consumption may encourage the BoE to adopt a more hawkish tone for monetary policy, and the meeting minutes may heighten the appeal of the sterling should we see a growing number of central bank officials show a greater willingness to normalize monetary policy sooner rather than later.

However, the BoE may further delay its normalization cycle amid easing price pressures paired with the widening trade deficit, and the British Pound remains at risk of facing additional headwinds over the near-term should the fresh batch of central bank rhetoric drag on interest rate expectations. 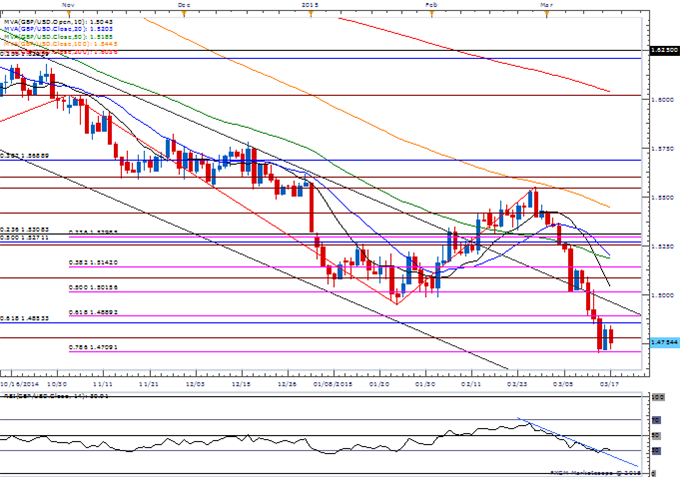 The Bank of England (BoE) Minutes continued to show a unanimous vote to retain the current policy, with the committee highlight the risk for a further appreciation in the sterling amid the divergence in the policy outlook. In turn, the BoE warned that the low-inflation environment is likely to persistent over the near-term, but went onto say that the next move is likely to be a rate hike as the central bank anticipates to achieve its 2% inflation target over the policy horizon. Increased concerns surrounding the sterling dragged on the exchange rate, with GBP/USD slipping the 1.4650 region, but the pound-dollar bounced back during the North America trade to end the day at 1.4887.