- Core Rate of Inflation to Hold Steady at Annualized 2.2% for Second Consecutive Quarter.

Despite forecasts for a slowdown in Australia’s Consumer Price Index (CPI), the stickiness in the core rate of inflation may spur a bullish reaction in AUD/USD as it dampens bets for lower borrowing-costs in the $1T economy.

Even though the Reserve Bank of Australia (RBA) keeps the door open to further reduce the cash rate, Governor Glenn Stevens may largely carry the wait-and-see approach into the second-half of 2015 as record-low rates paired with the depreciation in the aussie helps to encourage an improved outlook for growth and inflation.

The pickup in business confidence paired with the expansion in private-sector consumption may encourage stronger price growth in Australia, and a positive development may heighten the appeal of the Australian dollar as market participants scale back bets for another RBA rate cut.

However, the rebalancing of the real economy may continue to drag on inflation amid the ongoing adjustments in the terms of trade, and the RBA may have little choice but to further embark on its easing cycle in an effort to stem the downside risks surrounding the region. 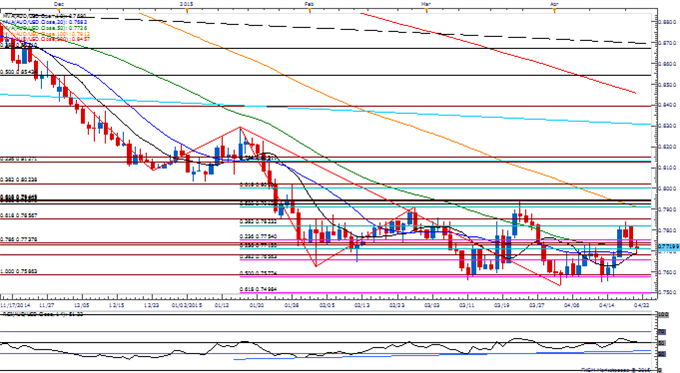 Australia’s Consumer Price Index (CPI) slowed to an annualized rate of 1.7% from 2.3% in the third-quarter of 2014. At the same time, the core inflation rose more-than-expected as the trimmed mean climbed 0.7% during the three-months through December, while the annualized rate cooled to 2.2% from a revised 2.4%. Easing inflation on the back of falling commodity prices may raise the Reserve Bank of Australia’s (RBA) scope to further embark on its easing cycle, and the central bank may continue to endorse a dovish outlook for monetary policy in an effort to further assist the rebalancing of the real economy. The Australia dollar strengthened following the sticky inflation prints, with AUD/USD surging above the 0.7975 region and closing the Asian Pacific session at 0.7995.