The Bank of England (BoE) looks poised to retain its current policy ahead of the May election, but the uncertainty surrounding the fiscal outlook may continue to dampen the appeal of the British Pound as the central bank remains at risk of further delaying its normalization cycle.

Even though the BoE remains on course to raise the benchmark interest off of the record-low, there’s little evidence that the Monetary Policy Committee (MPC) is approaching the lift-off period, and Governor Mark Carny may endorse a more neutral tone going into mid-2015 should a shift in U.K. leadership raise the central bank’s scope to retain the highly accommodative policy stance for an extended period of time.

Prospects for a stronger recovery along with the ongoing improvement in the labor market may encourage the BoE to normalize monetary policy sooner-rather-than-later, and the sterling may snap back against its major counterparts should the central bank implement a more hawkish twist to the forward-guidance for monetary policy.

Nevertheless, subdued wage growth paired with slowing price growth may keep the MPC on the sidelines throughout 2015, and a greater willingness to retain record-low borrowing costs for longer should further dampen the appeal of the sterling as it drags on interest rate expectations. 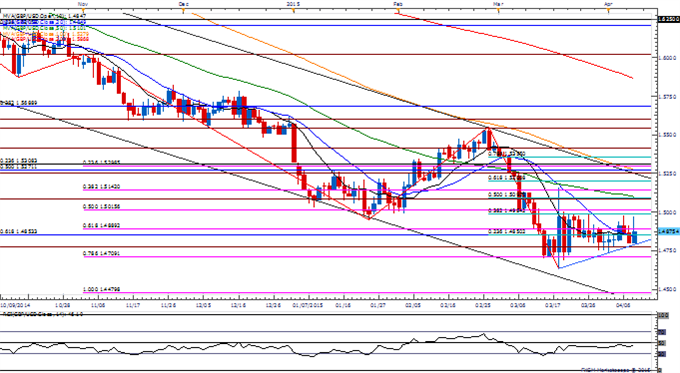 The Bank of England (BOE) once again refrained from releasing a more-detailed policy statement as the central bank retained its current policy in March, with the benchmark interest rate holding at the record-low of 0.50%. Despite expectations for a stronger recovery, the BoE may continue to delay its normalization cycle as Governor Mark Carney warns of a temporary dip in price growth, but it seems as though the Monetary Policy Committee (MPC) remains on course to move away from its highly accommodative policy stance as the central bank head continues to prepare U.K. household and businesses for higher borrowing-costs. Nevertheless, the lack of fresh commentary spurred a limited reaction in the British Pound, with GBP/USD largely facing choppy price action throughout the day to end at 1.5248.