- Will the Fed Sound Increasing Cautious and Warn Against Further USD Strength?

The Federal Open Market Committee (FOMC) meeting minutes may undermine the bullish sentiment surrounding the U.S. dollar should the statement highlight a more cautious stance on the economy and emphasize the risks surrounding the stronger exchange rate.

Why Is This Event Important:The fresh batch of central bank rhetoric may dampen the appeal of the greenback as the Fed remains in no rush to normalize monetary policy, and a slew of dovish commentary may trigger a larger correction in EUR/USD as market participants scale back bets for a mid-2015 rate hike.

The slump in household spending paired with the slowdown in private-sector credit may become a growing concern for the central bank, and a growing number of Fed officials may show a greater willingness to carry the zero-interest rate policy (ZIRP) into the second-half of this year in an effort to further combat the downside risks surrounding the real economy.

Nevertheless, with expectations for a stronger recovery in the second-quarter, the Fed may stay on course to normalize monetary policy in mid-2015 as Fed Chair Janet Yellen argues that the recent batch of soft data are largely due to seasonal and transitory factors. 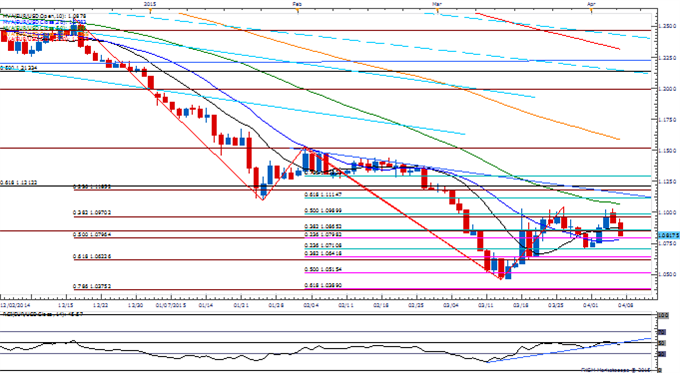 The Federal Open Market Committee (FOMC) meeting minutes sounded more cautious this time around as many officials were inclined to retain the zero-interest rate policy (ZIRP) for longer. Despite the positive developments coming out of the U.S. economy, the committee highlight the risk surrounding the global outlook, with some members noting the risk for a further appreciation in the dollar as the Fed looks to change gears in 2015. The greenback struggled to hold its ground following the dovish comments, with EUR/USD breaking above the 1.1400 handle to end the day at 1.1414.