EUR/USD to Find Relief on Dismal ISM Manufacturing- 1.0850 in Focus

Another downtick in the ISM Manufacturing survey paired with a further slowdown in the employment component may drag on the dollar and spur a rebound in EUR/USD as it dampens expectations for a Fed rate hike in mid-2015.

Indeed, signs of a slower recovery may encourage the Federal Open Market Committee (FOMC) to adopt a more dovish tone for monetary policy, and we may see a growing number of central bank officials show a greater willingness to carry the zero-interest rate policy (ZIRP) into the second-half of the year amid the ongoing slack in the real economy.

The ISM Manufacturing survey may continue track lower amid the slowdown in private-sector consumption, and a dismal print may dampen the appeal of the greenback as it increases the Fed’s scope to further delay the normalization cycle.

Nevertheless, the rebound in building activity along with the pickup in job growth may highlight an improved outlook for future production, and an expansion in business outputs may heighten the bullish sentiment surrounding the greenback as it puts increased pressure on the FOMC to move away from the highly accommodative policy stance. 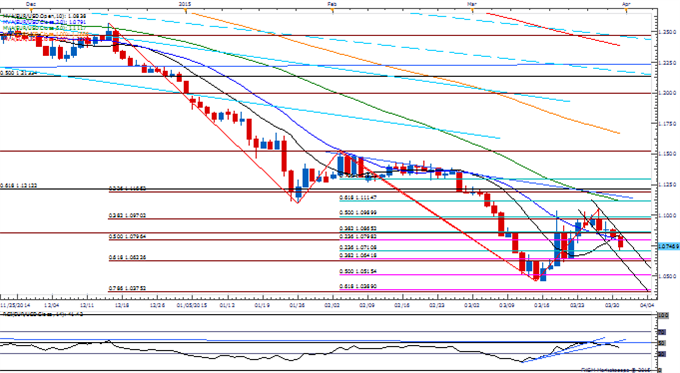 U.S. Manufacturing expanded at a slower pace in February as the ISM survey narrowed to 52.9 from 53.5 the month prior, with a deeper look at the report showing a second consecutive contraction in new export orders, while the employment component slowed for the second-month. Despite the downtick in business outputs, the Federal Reserve may stay on course to normalize monetary policy in mid-2015 as the central bank anticipates lower energy prices to boost private-sector consumption, one of the leading drivers of growth. The greenback strengthened after the release, with EUR/USD sliding below the 1.1200 handle and closing the day at 1.1181.