- U.K. Retail Sales to Pick Up for First Time Since November.

A 0.4% rebound in U.S. Retail Sales may improve the British Pound’s appeal and generate a more meaningful rebound in GBP/USD as it puts increased pressure on the Bank of England (BoE) to normalize monetary policy.

Prospects for a stronger recovery may prompt an increased number of BoE officials to adopt a more hawkish tone for monetary policy, and we may see Governor Mark Carney continue to prepare U.K. households and businesses for higher borrowing-costs as the central bank turns increasingly upbeat towards the economy. However, with the May election quickly approaching, the Monetary Policy Committee (MPC) may continue to endorse a wait-and-see approach going into mid-2015 amid the risk for a material shift in fiscal policy.

Easing consumer prices paired with the pickup in job growth may encourage a strong rebound in household spending, and a positive development may produce a more meaningful correction in GBP/USD as it boosts interest rate expectations.

However, the ongoing weakness in wage growth along with the slowdown in private-sector credit may drag on household spending, and another dismal retail sales report may heighten the bearish sentiment surrounding the sterling as the near-term outlook remains clouded by the May elections. 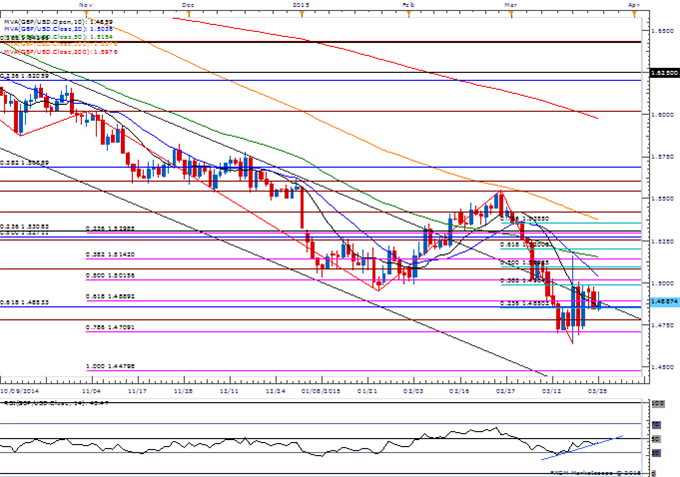 U.K. Retail Sales slipped another 0.3% in February after contracting a revised 0.1% the month prior. The ongoing weakness in private sector-consumption may encourage the Bank of England (BoE) to further delay the normalization cycle as the entire committee now favors a wait-and-see approach, and the British Pound remains at risk of facing additional headwinds over the near-term as the May election clouds the outlook for fiscal policy. The market reaction was short-lived as GBP/USD held its ground throughout the North American trade to end the day at 1.5399.