- Will a Slowdown in the Quarterly Growth Rate Drag on Interest Rate Expectations?

A pickup in New Zealand’s annualized growth rate may spark a near-term rebound in NZD/USD as it dampens bets of seeing the Reserve Bank of New Zealand (RBNZ) revert back to its easing cycle.

Signs of a stronger economic recovery may encourage RBNZ Governor Graeme Wheeler to adopt a more hawkish tone for monetary policy, and the central bank may show a greater willingness to further normalize monetary policy over the medium-term as the region gets on a more sustainable path.

For LIVE SSI Updates Ahead of the GDP Print, Join DailyFX on Demand

The pickup in household spending along with the expansion in business outputs may generate a strong 4Q GDP print, and a positive development may heighten the appeal of the New Zealand dollar as Governor Wheeler largely endorses a wait-and-see approach for monetary policy.

Nevertheless, waning confidence paired with efforts to cool the housing market may drag on the growth rate, and a dismal GDP figure may fuel speculation for lower borrowing-costs as the central bank keeps the door open to further support the New Zealand economy. 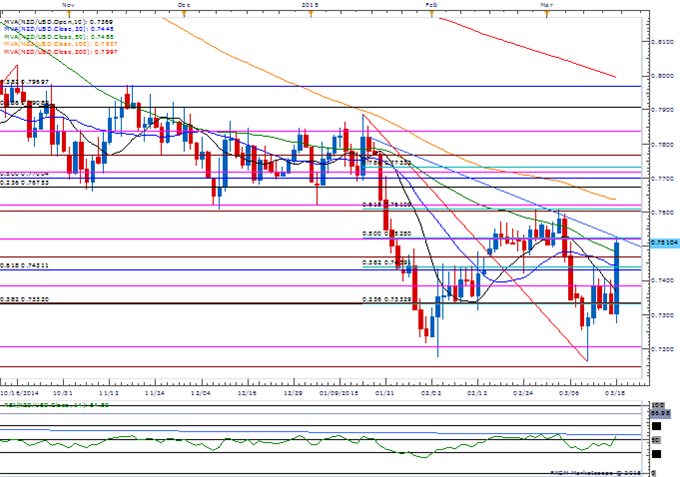 GBPCAD at Support- Scalps Target 1.8785 Ahead of Key Data

The New Zealand economy unexpectedly increased 1.0% in the third quarter of 2014, while the growth rate climbed an annualized 3.2% during the three-months through June. Despite the strongest rate of growth in seven years, the weakening outlook for the global economy many encourage the Reserve Bank of New Zealand (RBNZ) to preserve its wait-and-see approach in 2015 especially as falling commodity prices drags on inflation. Failure to meet market expectations generated a limited market reaction in NZD/USD, but the New Zealand Dollar regained its footing during the day to end the session at 0.7731.