- Canada Employment to Contract for Third Time in Last Six-Months.

- Jobless Rate to Pick-Up From Lowest Level Since 2008.

A 5.0K contraction in Canada Employment paired with an uptick in the jobless may drag on the loonie and produce fresh 2015-highs in USD/CAD as it fuels speculation for a further reduction in the Bank of Canada’s (BoC) benchmark interest rate.

Even though BoC Governor Stephen Poloz endorses a wait-and-see approach, a dismal labor report may encourage the central bank to adopt a more dovish tone at the April 15 policy meeting in order to encourage a stronger recovery.

The slowdown in private sector consumption paired with the ongoing weakness in the housing market may drag on employment, and a marked contraction in job growth may heighten the bearish sentiment surrounding the Canadian dollar as the BoC remains cautious on the economy.

Nevertheless, lower input costs accompanied by the pickup in private sector activity may encourage Canadian firms to boost their labor force, and a positive development may keep the USD/CAD range intact as the BoC looks to retain its current policy over the near-term. 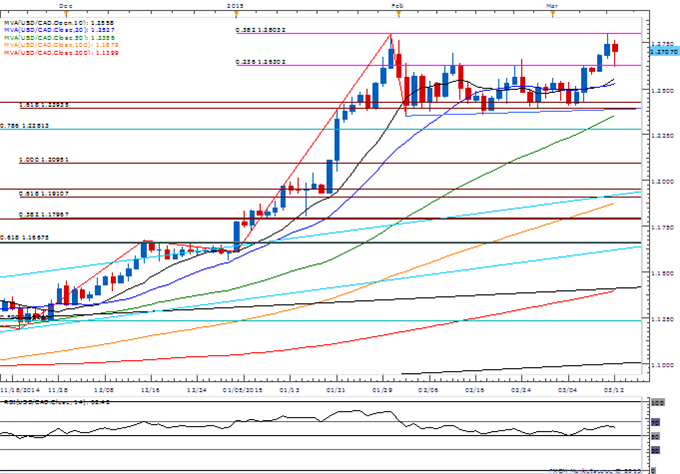 The Canadian economy added 35.4K jobs in the first month of 2015 after contracting a revised 11.3K the month prior. At the same time, the jobless rate fell to an annualized 6.6% from 6.7% the month prior even as the participant rate held steady at 65.7%. Despite the better-than-expected headline print, the pickup in job growth was larger contributed to a 47.2K rise in part-time positions as full-time employment slipped 11.9K in January. Despite the better-than-expected print, the U.S. Non-Farm Payrolls report drove USD/CAD above the 1.2450 region to end the day at 1.2504.