A rebound in U.S. Retail Sales may heighten the bullish sentiment surrounding the greenback and spur a further decline in EUR/USD as it fuels speculation for higher borrowing-costs in the world’s largest economy.

The Fed may stay on course to normalize monetary policy in mid-2015 as the central bank anticipates lower energy prices to boost private-sector consumption – one of the leading drivers of growth – and Chair Janet Yellen may adopt a more hawkish tone at the March 18 meeting as the board remains confident in achieving the 2% target for inflation.

Greater demand for large-ticket items paired with the ongoing improvement in the labor market may generate a better-than-expected retail sales figure, and a positive development may put increased pressure on the Fed to move away from its zero-interest rate policy (ZIRP) as growth prospects improve.

Nevertheless, subdued wages along with the slowdown in private-sector credit may drag on retail spending, and another unexpected contraction may further delay the Fed’s normalization cycle as the ongoing weakness in household earnings undermines the central bank’s scope to achieve the inflation target. 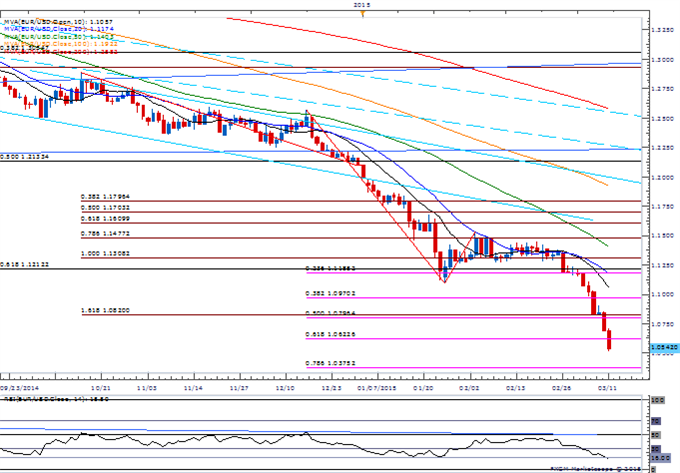 NZD/USD Retains Bearish Momentum Ahead of RBNZ- 0.7175 in Focus

U.S. Retail Sales declined another 0.8% in January following a 0.9% contraction the month prior. Despite lower energy costs, discretionary spending at department stores slipped for the second consecutive month, while demand for motor vehicles and parts slid another 0.5% during the same period. Following the worse-than-expected print, the greenback struggled to hold its ground, with EUR/USD climbing above the 1.1400 handle and closed the day at 1.1428.